Maybe some TrackManiacs were already fans of Virtual Skipper (also developed by Nadeo back in the day^^).

There is no cool Virtual Skipper iteration for ManiaPlanet (yet?^^) but there is the last race of the 2013 America's Cup and there is a live-stream on YouTube tonight.

For those who did not know, here is the YouTube link: AMERICA'S CUP FINAL - RACE 19

Live stream starts at 22h, race should start around 22h30 CEST if there are no delays because of wind conditions.

I think yesterday they mentioned good wind conditions for today, then the race only lasts 20 to 30 minutes, the catamarans are incredibly fast, some races were still very close with tactical match-racing. There were already 18 races in a best-of-seventeen (!).

Team USA got -2 points because of an illegal weigh-distribution in the AC 45 cup...three sailors got banned for the America's Cup and they got the mentioned -2 points.

More than a week ago the score already was 8:1 for NZL...

NZL had more than only a little bit of bad luck, many fans home in NZL probably had really bad breakfast-experiences the last seven days (it is early morning in NZL during the races)...

...one race was canceled, because due to light winds the race could not be finished within the time limit of 40min, NZL had a big lead in that race, so they would have taken the cup that day (!) one race was canceled because wind limit exceeded...also with NZL in the lead...

...and now there is only once race left...tonight... winner takes it all.

So this post is for the TrackManiacs who would not have heard about it otherwise...but might want to have a peek at the the up to 45knots (~80kmh) fast catamarans, which look really awesome with San Francisco as a backdrop. 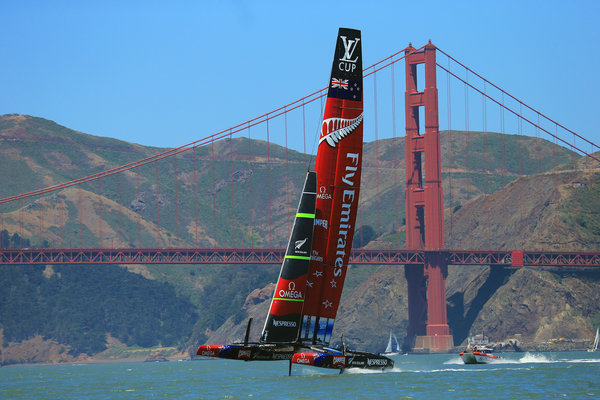 Played VSK 5 online which was quite nice. Simple but hard to master.

A credo in life Nadeo sticks to even today.

Not a good winner Team USA would have seen Team NZL be the winner but thats a bit of luck and also a good way to foil with the new techniques.

Althought it is not really sailing in the traditional way, they simply had to do it at least once with those rigid wings.
It is very impressive how fast they can go, especially when they lift off and glide only with the hydrofoils