After the recent updates, all solo levels are locked and no tracks are visible

It was announced that some things would change, this means you might need to create the pack again

I would like to present my newest pack you today. 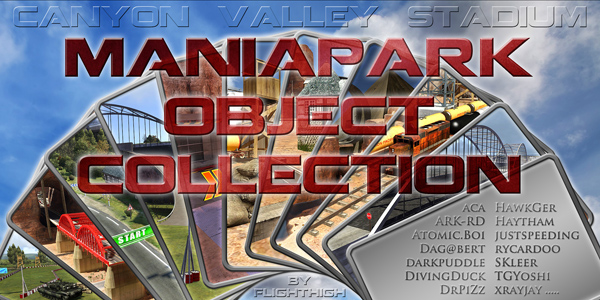 I can already hear the groan: "Oh no," not a pack. But let me briefly explain what is going on with this pack up.
Maybe since you believe in the end that it is a good idea and it will be a must for each of you.

Before I do I would like to briefly like to thank the beta testers from the TMU @ FUN community.

have in recent weeks support my idea and worked intensively with the development and debugging. You have tested the objects on their ability to run and build routes.

Special thanks go also Dag@bert he also has the screens for the Pack designed and made. I should not have done so.

Of course, my thanks also provide all the object creator their work on Mania parking available and want to rest. Without these objects would this pack
never arisen.

The idea for this pack came to me when I heard that some players were confused where - when - how to create a link in a pack andwhere - how - you can post them. Added to this was the tracks from a limited pack on servers were run.
These particular tracks are concerned only with a server when it is started well under the packs. Only then the server has everything what he needed to represent the routes.
This confusion can persöblich I understand brought me the idea all ITEMS (objects) to collect from the Mania Park and do in a pack where you then only this place has all the objects are available and it only requires a server which then can run all routes.
Furthermore, this is upload replays on MX have been a problem if the tracks ran more by chance in the "normalne" Envis. For this Repalys were rejected by MX. All this can not happen when you create a route within this pack now.

The pack is designed so that you can build tracks in all three "normal" Envis Stadium, Canyon and Valley. Here are a then all objects in the individual Envis runs are also available. Furthermore, however, is also the multi-ENIV, so the mix of ambient and driving physics, possible in this pack. Again, one is then available all objects for each environment.
The pack contains more than 1,100 objects distributed to all Envis.

I hope I've explained it well and everyone sees the benefits of this pack. As long as one is after the game start in this pack can be from now on, make sure that the tracks you created
1. can be driven by other locally in the Pack
2. You can upload the tracks to MX
3. replay for MX can be uploaded
4 The tracks are also on a server that is created under the package, run

The pack has a total size of about 780 MB to be downloaded once. In a pack AutoUpdate is built in, so the following updates that will be it, only with what is new is updated.

I hope I have convinced you and you load quickly and use the pack will.

Note:
Unfortunately, the game objects that are included in the package and also local to the user in the folder C: \ Users \ xxxxxxx \ Documents \ Maniaplanet \ Items are in the editor Pack Double.
It would be better if your from installing or making completely empty later to prevent this folder to this duplication. Otherwise it could not be guaranteed that the tracks in the pack or on servers
will run properly.

the URL was not in the proper format, I have recopied it from his German sibling thread, now it should work

But to give a static IP as address is nowadays not ideal, better indicate a domain name

My titlepack creations:
-Only Stadium car

Speed and hard bunch of tracks in all environments. This is still beta version with, SKleer´s objects (small cliffs), Darkpuddle´s fuel station and Atomic Boi´s start, checkpoint, finish and mini roads used in SM tracks (with canyon car) ,this titlepack has got TM sings and some new blocks and of course menu music.

Title pack is 85% done, so I don´t have coloured menu and tutorial in menu
Includes custom music on all maps
Map D05 is looking as server map(music PSY Gentleman)
First maps are how to ride and how to drift( and loop)
Map D04 is TM2 Valley trailer map with custom music
A04-A06 are on drifting
*powered for new players TM
Link:https://dl.dropbox.com/s/q79j13cqbx3c0o ... .Pack.Gbx?

Ride and do missions in the city - custom items and music everywhere!
Custom menu and campaign+ translated

Description: This Title Pack contains a fine selection of over 100 well-known TrackMania 1 Dirt tracks created by members of =RR= Rentner Reloaded. All maps are completely ported to TrackMania 2.

Everybody loves Title Packs, so... I create a new Title called 2D Racing:

Also, first racer, who get author medals on all tracks, will have a prize - 10000 planets

Here is my first Title Pack:

Install directly from store or download BLATO Pack here!
To install the pack simply store the downloaded file in Documents\Maniaplanet\Packs and click one of your empty stations and choose "from disk". Then scroll to the BLATO Pack Title pack and click it.The download is roughly 51 Mb and costs 100 planets.

Tanks to all of you, this title is now available in the ManiaPlanet Store.
Last edited by Blatozor on 27 May 2017, 20:25, edited 4 times in total.
Top This titlepack includes the fixed singleplayer campaign of the original Obstacle titelpack.
I hope you enjoy.