Several complaints about closed areas being too dark already have been articulated in the forum, for example here and here.

But earlier today on a Server i experienced extrem dark spots even on a rather open classical Tech Track, i know the track by heart so i was able to drive it, but if it would have been an unknown track it would have been very frustrating.

I really think there should be one more option to calculate shadows if it would be technically feasible, although i understand that it can not be possible to allow "LightMap Compute: NoShadows" on the ClientSide like it was in TMNF.

If i understand correctly everybody shall have the same experience, especially because of fairness in Shootmania and with the technical design of Maniaplanet embedding the shadows into the map achieves just that (among other advantages, no calculating on slower computers).

But maybe there could be one additional option when calculating Shadows: 'very bright'. If that would be possible (similar to the setting "LightMap Compute: NoShadows" in TMNF) it would be the same for all players and still be fair.

Because on a TechTrack which is that dark (see video below) it is just not fun to drive:

--> direct comparison, identical track, identical machine (C2Q9650, GTX580,...), video not edited (YouTube darkens the video a tiny bit, but there was not much to darken to: TM²Stadium already is pretty dark within dense tracks):


The video above is shot from the replay i saved on the server, but I additionally tried to calculate the map on my PC, but no matter which setting i tried: it is always that dark:
http://www.fileden.com/files/2009/7/8/2 ... ch.Map.Gbx

It simply means, that you need to redesign your maps according to the needs of the new engine and take the light/shadow calculations into account, when making a new map.
Top

tcq wrote:It simply means, that you need to redesign your maps according to the needs of the new engine and take the light/shadow calculations into account, when making a new map.

I'm guessing Nadeo plan to release more lighting blocks, or let current blocks have a certain "glow" or lights. Although I think it's still very dark, because it has never been this dark in daylight :s
Trackmania2 ♥
Top

why to cause such huge comlications during mapping if it's possible to add one more option?

i love to remind old maps. and while i agree that shadows might be cool sometimes you still want to see where you're driving

simply to be able to turn the lights on in day and sunrise mood would solve a lot of these issues.

but indeed, i agree. it is too fast too dark.
CMC JumperJackﾂ
Top

I recall similar discussion in Canyon beta. In Canyon there is a media tracker block for switching on car lights, I used this sometimes in dark places on Canyon, probably Stadium has this MT block now as well?
Enjoying TMOne
Top

MrA wrote:I recall similar discussion in Canyon beta. In Canyon there is a media tracker block for switching on car lights, I used this sometimes in dark places on Canyon, probably Stadium has this MT block now as well?

I had this very idea in this thread, and it seems the solution might just be to change car model, although I'm not sure it's enabled for the default model.

Still too dark though
Trackmania2 ♥
Top

MrA wrote: In Canyon there is a media tracker block for switching on car lights, I used this sometimes in dark places on Canyon, probably Stadium has this MT block now as well?

...this thread...
Still too dark though

...and hello MrA, TMX-Royalty, creator of legendary Desert Mix Track 'I Can Mix'
and proud owner of one of only three 'author-tags' from 2008 star track contest

and initial host of the Saturday KO-Races (i think there was something with an Australian server, but didn't you host it first...hope i am not off on that one...would totally ruin my recital of extraordinary praise :- >)

Before eie beat me to it with his post i gathered the praise, because i wanted to point out that i considered your post slightly off-topic and wanted to sweeten that argument with some big praise :- > and wanted to hint the thread eie did, with skeleton's tip with the car (btw i tested it this morning with the Rally Car Skele named, which worked great in EnaiSiaion's 'Prey and Shadow' the light of the car is clearly visible, but in vast rooms of large RPGs it would not be of much use

So i already prepared an answer for tcq, i considered tcq's answer missed my point as-well, also mentioning new tracks and i wrote already an answer making my point more clearly:

My point is not about new tracks and not even about RPG tracks ( i would like RPGs to be brighter in TM²Stadium and have less blue mist in them^ ^, but they are not an issue we can play them on TMNF-servers, and RPG players want to be tortured anyway, so even if the room is pitch black in TM2S, who cares :- >, "Oachkatzschwoafs" is to easy anyway when the player can see the track :- >> 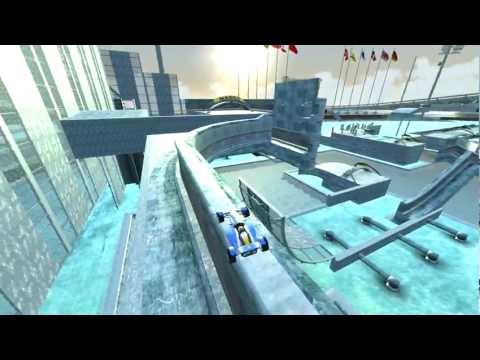 
My point is about the danger of a dimly lit track potentially repelling newcomers we might expect in the months to come.

As for my example PartyTech: true rookies can barely make it to the finish on PartyTech when they can see the track, with three corners in complete darkness i don't see much Track-addiction building up

for a total beginner no matter how enthusiastic he or she might be.

I really think this is an important issue and should be addressed, i have a longer answer written for tcq :- > and i think i really made a point, but i have to proofread it one last time before posting my answer to tcq :- >>

Sorry, I did not intend to reduce the validity of the original point being raised.

You are very good at finding priase though, you may try it again whenever you like

For StarTrack, I am more proud it happened at all than I am of the tag, and credit goes to RicardoRix (tmx coder of star contest) and Nadeo for that.