Discuss everything related to Trackmania Turbo.

Pre-ordered with the hopes of playing the next month and they are over, this really itches me to refund my copy.
I know the whole thing about improvements and all (afterall, the wait on GTA V was huge and it ended nice at the end), however, i don't see why something like this would need to happen with TrackMania.
Top 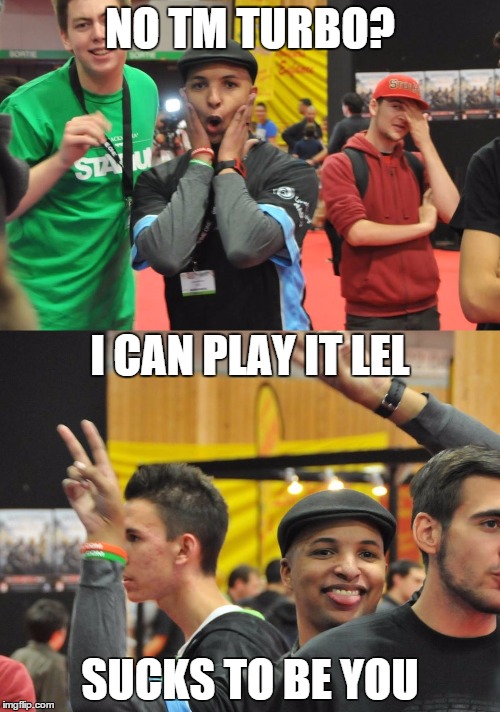 I couldn't resist sorry. I have nothing against you Cerovan, you seem like a really awesome person. Somehow the images drakonia posted gave me this idea, as you're the only guy epic enough to make meme worthy pics.

Delay is only cos CONSOLE SHIT ._. ...and i rly don't know how good will be optimization cos when someone optimize game from console to pc ,it will be bad cos consoles have low-end specs.
Top

2016, ok, let's do like nothing happened, It will bring further stuff and polishment into maniaplanet platform.
But listen... What does "early" stand for in NADEO common language? Q1, from January to April?
Hey, 2016 is not that far away but I'd like to hear some release date on maniaplanet schedule before I open my easter eggs (april)

Didn't buy TMT yet, seems I did good. I can spend my bucks on xmas presents. And save again some €€ for an easter present.

TrackMania Original brought me here... Here I am since 2006
Top

DomcoDca wrote:Delay is only cos CONSOLE SHIT ._. ...and i rly don't know how good will be optimization cos when someone optimize game from console to pc ,it will be bad cos consoles have low-end specs.

Wrong. If you had read the Ubi blog post (or the first post of this thread) correctly, you'd know the real reasons for the delay. Let me quote:


Cerovan wrote: During the additional months, we plan to enhance the campaign and the game's interface. Since multiplayer is such a strong component of the Trackmania experience, we also plan to continue improving Trackmania Turbo's multiplayer modes. With updated multiplayer modes comes more multiplayer testing. The extra time will give us an opportunity to make sure that the online infrastructure is stable and that the online experience is a smooth one.
We are also working on adding an extra feature that offers a new way to challenge your friends on your favorite user made tracks. This is a special mode that we think will extend Trackmania Turbo's longevity because of how it spurs competition between players.
Finally, we will be able to fine-tune the random generator feature and make the Trackbuilder even more accessible and complete. These improvements will allow the community to create more tracks that are even quicker and crazier than ever before.

nailbomb69 wrote:So you're telling me that bug reports for valley and canyon in the bugs forum aren't bugs?

From the few which are Canyon/Valley-related, most are interface/script bugs which can be applied to Maniaplanet issues in general.
Top

I don't mind the TMT delay. A console game really needs to be finished when released. So it is important to fine tune TMT.

On the other hand I cannot wait for new updates in MP. We players need something new from time to time.
As a community member I try to keep the community together by hosting contests and events (like the MTCs and the MX adventcalendar 2015. Be prepared! ). But it is hard to get new players into the game because it is too complicated to learn. There are many hidden and unexplained features, some features are done in a complicated way that's not intuitive. Many things have become too uncomfortable to use for new players and also for me over time. (e.g. custom objects - still having a hassle every time I use them...)

At least give us the bug fixes that were told to be fixed in the dev version months ago. I would love to see an update every month - just for the fixes - because there are many things to be improved in MP.

However, keep working Nadeo and listen to the community, please

I totally agree with Haenry. I'm not any happier about the delay than the rest of you, but I'd rather it be delayed than released unfinished. However, in the mean time, don't leave the MP community behind

Please put some of your time towards a community that already exists (and is dying) instead of working on a new community. If you lose this community now, you won't have much of one in TMT either. So keep the updates coming, give us something to play around with (new blocks are always amazing), and I think you'll find that people won't be so upset when you push a release date back

I trust that you have good reasons for releasing it later, but at least give us [img]something[/img] in return, even if it is only some bug-fixes in MP.

Give us something to play with, i still want the 3D models sources for common ManiaPlanet. That would be pretty nice.

Jokes aside, i guess i won't refund yet, but please, dont be another Rockstar and do multiple delays.
Top

Rots, while the precise date is still undisclosed for TMT, I can easily tell that most of the team with be working on Maniaplanet as early as January and for a long long time.

Domino & haenry, Maniplanet is not untouched internally. Unfortunately, it's too much of a hassle and a loss of time on the long run to make small update at the moment. The strategy is to go toward Maniaplanet 4 closed beta, and then make updates, but we can not make small updates in the already much modified environment of work we had to do for TMT without taking too much time & risks about releasing issues.

MrA, crossplatform has too much constraints that are difficult to undisclose. We are making sure that the physic is exactly the same on all platform, so people can compare like in a time attack.

The Big Boo, I can not really talk about what the communication is going to make at PGW.

Zackii, Trackmania Turbo community is likely to gather here on the long run. And I think that TMT can also be seen in a way to entertain the Maniaplanet community. So, instead of releasing an update at the same time as TMT, TMT should bring some activity, a little like what Haenry is talking about. I know it's not in Maniaplanet, but it's at least in the range of Trackmania.