I discovered Trackmania when PowerUp came out. I was a student at that time, I did not even know what I really wanted to do, but I already loved video games and programming. It was a friend form boarding school who bought it, one of the few who had a laptop (very popular guys in boarding shool as you can guess ^_^). I remember that we had to launch the game multiple times because of SecuRom

: the CD drive on his laptop was not handled correctly or something, and it took 5/6 attempts to work.
But when we got it to work, it was great

I've never been been a good driver, but I was good at the Puzzle mode : I built the most efficient tracks, and my friend drove. I don't remember how the ladder worked at the time : I think we had to upload the replays on a website or something. And if I remember correctly, my friend and I got some pretty good records (for a very brief time) on a big puzzle map (a metal pyramid) because of our clever pathing.

A few years later, I had not played TM in a while (I'm not a good driver xD). While I was in engineering school, a friend of mine wanted to organize a TM competition for the students, but she did not have the time to do that on her own. So I helped her do it. I was completely unaware that this competition would be used by people at Nadeo to look for internship candidates

. As you can guess : I got the internship and joined Nadeo (along Gouxim, we were the young ones at the time xD)

Proof of how bad a driver I am : when we were testing some team racing modes (before Canyon IIRC), in the studio people gave my name to "a run that went well, until the car crashed on a pillar of the finish line, ruining everything" : they called it a "guglish" (a gugli finish) ! xD

Wow TMarc, thanks for sharing the photo!

... and thanks to the NADEO friends for your brilliant tales!

MY LITTLE STORY:
It was late 2003 and I was running a one-teacher school in the Northern Territory desert (I've had lots of jobs and teaching was just one of them). The whole community had gone to Uluru for traditional ceremonies, leaving me with sixty+ dogs, twenty+ pet donkeys and a few pet scorpions in jars and tin cans to look after.

I spent some time in the office, wasting satellite internet time to relieve my boredom, when I stumbled on and advert link to an article about some sort of racing game made by a French outfit. There was a link to a demo download, which I ALMOST didn't click on...

Having played UT for several years, I was familiar with online play but had never really been aware of which countries other players were in. This new game came with flags and a very good chat box - most people used English which was nice for me.

Well, within a couple of weeks, I was hooked on the action, the competition, the chat and the sheer fun!
I later formed a Clan (ZeDeX Degrees°) which lasted about six years before the other guys grew up, got married, finished school/ lost interest etc.
I've had 13 different addresses since then and gone through a dozen gaming rigs. Every Trackmania version has always been installed and I log into whichever one is current almost every day. For the past 2 1/2 years, my internet has been so bad I have not been able to play online but I download new maps and still 'go for it' as hard as ever; still struggle (and fail) to build good maps; still keep in touch with many players/ friends who've been around for most of the years.

That's also a nice history, nighthawk!
Just buy curiosity, do you still have your first maps?

Pathetic yes but they're all mine LOL.

Also, to brag, here's my long-running thread on Maniazones: Proof of my teaching background (can talk for an hour underwater with an apple in my mouth)

Um...
Nighthawk
Getting old, forgetting most of what I ever learned !
My name is Nighthawk. The 4571 used to be my IQ.

And for my best moment, it was being invited in the studios and meeting the team in real life. Such nice people! Seeing the genious Hylis at work and hearing him tell about his ideas and plans with such enlightenment was a real adventure! @Alinoa is one of the kindest persons I know...
Nadeo deserves all the success in the world!

Special thanks (in random order) go out to Hylis, Alinoa, Farfa, XBX, PWF, Reaby, W1lla, Weerwolf, Haagse Smurf, Klompie, Max, Oliverde, Newfy, All people that have ever been in my team and everyone who's name I forgot after all these years

damien wrote: ↑
23 Nov 2018, 16:46
First memory :
The rush before burning the first gold master trackmania cd rom :
back in time, we were a 6-7 people team, struggling to have a "non too buggy" executable,
finishing with a 72+ hours long nonstop rush, implementing some last minute features (like the mediatracker v0.001) during the very last hours
before gold master.

Then Luc for from Focus Home Interactive (our publisher at that time) went driving all the night to reach the duplicating plant
in the east of France..

I remind that my brother helped recording bronze / silver medals at family's dinners as well.

With Trackmania I discovered the online gaming world. It was the first game where I play on online servers, starting to meet people online. I liked to play on French servers as lepapa one, or the XCS one on Sunrise, then united. One day, someone asked me to join his team. I was so happy and honored. I thought that finally someone found that I play well and I was proud. Actually I discovered later it was not for my skill that I had been recruited^^ but because the team leader found me nice. However this makes me happier ^_^

Now what I prefer in Trackmania is to learn that TM brings good things to people and reading all testimonies on forums, emails, twitter makes me very happy!

As stated by Knutselmaaster, The personal conversations with @Nadeo Team Members, the gifts(see end of post for some framed images, i still keep some in a nice place in my house.) The Community which is kind, nice and always 'wanting' to help others. (It's a rare thing these days.).

Even though the world is changing in a material way, there is no I in Nadeo and as the Navy Seals say:

The easiest day was yesterday.

this community, it stopped me from coming to the 10th anniversary, (but hey, in 5 years i will take a rain check ^^.)

It isnt about me but the Team Nadeo/Ubisoft and the thereforementioned community, Thanks for the Oppurtunities,

So many to say thank you to

but you know who.

Great to see so many awesome stories and also from the NADEO members as well!
Also really cool to see your back here Knutselmaaster and also W1lla!

My little story:
We started the Smurfs on TMNF and moved over to TM2 in 2011 with Canyon during the open beta.
Valley and Shootmania Royal followed later.
As a proud member of Smurfs we host a lot of cups in Canyon, Valley and Royal and are also hosting the SCL.

My memories are best shown here: 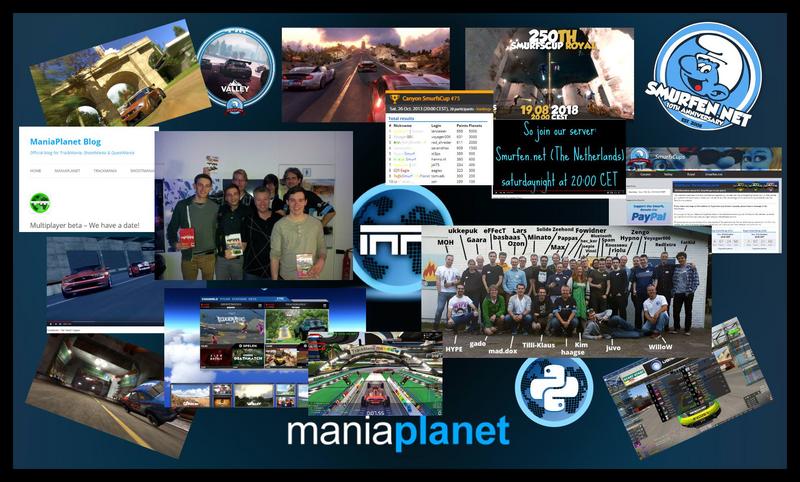 On the right side you see mostly pics from :
Smurfscups such as Smurfscup Canyonscores, our Smurfscupwebsite, promo’s, announcements,
the 10 years Smurfslogo, the PyPlanet logo, as well as the picture of the huge Smurfsmeeting we had to celebrate our 10th anniversary.
But also a picture of crazy day’s on our server (everyone suddenly became TiredSmurf) or a picture from back in the days on a crowded TMNF server.

On the left side you see:
Good memories of my visit to NADEO Paris (10th TM anniversary), the anncouncement of the Maniaplanet Beta, a playermade trailer,
and just really good pics of all things we love and play!

I've been part of Nadeo for only 2 years now, but time flies so fast, it feels like yesterday was my first day !
Trackmania was my first racing game, it was easy to play, almost free and so much fun !
Having the chance to work on one of the biggest french IP, not necessarily in sales, but in engaging communty, is the best thing that happened to me in years. This team is great, the ambitions are huge and what we're making matters to you, the players

Can't wait for the next years to come !
Top
Post Reply
66 posts