Ahh those photos w1lla, from Gamescom, right? I was there too! Played Turbo there

I kinda didn't want to write something here because I am much more connected to ShootMania than I am to TrackMania and since this is the birthday of TrackMania, I didn't want to spoil the atomsphere with good old HYPE, not being able to talk about anything else but ShootMania.

But in the end it is TrackMania that brought me here and that I still play and love next to ShootMania, so I here I go I guess.

My brother and me started in 2004 with TMO. It was just one of a few racing games we played back then and even thought it didn't mean anything really special to me, I played and enjoyed it a lot.
A few years later we got Sunrise Extreme and that one I played even more. Especially Island was just so cool. I'm sure it was one my most played games at that time and I was hyped for the next game of NADEO.
When I finally figured out that I am not able to buy TM² Canyon in store like I was used to, but had to download it, I arrived on the Maniaplanet. For the first time ever I played a game online with other users and it was amazing. I didn't really interact with the players on the server back then, but I loved to hunt against other real humans.

Everything changed when I talked with a classmate about this game and he told me about ShootMania! (BUHH ShootMania

)
Well I played TrackMania less and less, but when I got more active in the ShootMania community, I somehow found my way back to TrackMania. Playing the SmurfsCups, MX KO's, riolus xd races, solo hunting and maybe here and there something else.

I still spend most of my time on ShootMania and I hope that won't change, but I also love TrackMania and the community and I very thankfull for everything NADEO and this great community has done!

I meet awesome people through this game and even meet quit a lot in real life already. I had a banger of a time so far and hope that it will last still much longer.

Thank you all and love ya!

Awesome to read from Nadeo members!

Oh yes! The amazing server of the late Lepapa!
He was so kind and his server was so futuristic for the time.
I remember having the worst ranked map ever on his server

Damn I miss the late 2000s. Even though those times are great too!

I discovered Trackmania in 2006 with Nations. I grew up in Reunion island and at the time it was the only game I could play online where my horrible ping and 56K modem didn't matter.

The other players were teleporting all other the place, but it still was a fascinating experience to be able to meet people from all around the world from my tiny rock lost in the Indian ocean. Later I got an ADSL access to the internet and started playing a lot more for fun and competitively. In the years that followed I co-founded a team (mgk) and the TM-Actu website with Boubisis. Trackmania helped me to learn a lot of things but I was far from thinking that it would actually become my job a few years later.
And now I come to work everyday hoping that what we do at Nadeo will allow players to have has much fun and meet has much interesting and nice people that I have since 12 years.

Happy birthday Trackmania !
Contribute to the ManiaPlanet documentation on GitHub
A question about ManiaScript? Ask it here!
Top

Just posting the novel I sent to Nadeo for the memories, as it was (a bit ^^) shortened :

Share one memory. Only One. One since that day where young Poutrel randomly watches a video on a video game website, about a free racing game.
"Wow, this look fun! Gotta try it, and it's free anyway, so I'll only play a couple of times but that doesn't matter!"
This was nearly 13 years ago.

So now to choose a memory that prevails over the others...
Was it the first team I cofounded, without any idea of what it meant or any kind of organization ? (YoYo was here, although I doubt he remembers me now !)

Was it that day in late 2008, where Stitch, then-legendary leader of the then-legendary Chèvres Sexies (CS, Sexy Goats), asked me to join the team? (I can still remember Fistule's Island map we were playing at that moment)

Was it the countless hours in TeamSpeak with teammates and friends, playing our short maps all night long? (Bet I can cut this 6-second map?)

Maybe the Freestyle Golden Age, with the multiple servers, the gif topic (/!\ 56k Warning !) (that strangely disappeared btw), the Freestyle Cup, the videos...

Ah the TM videos, when YouTube wasn't an option you would think off! Downloading these precious piece of arts, to enjoy again and again the TM Zap or StreetStyl3! Those were GOOD!

Or what about the 24 hours events by team TEP? That time were I was just chatting with team FDV for most of the time, when suddenly near the end of the event, nobody in the team was left so I just filled in unexpectedly...

And all the teasing and the impossible wait made by the damn good trailers, the Hylisian games..., before each release. There was even a Windows Widget to display how much time was left before Canyon's release. And I got a huge headache on the release day, do you believe that?!
(Never got myself in a close beta though, making the hype even bigger everytime!)

The hunt for the best times, as we can easily forget that it's the core of the game, produced itself some great memories, either with the wins (Canyon D08 WR with my own cut yay! Befrienfing THE riolu himself!) or with the best fails (physics, you're drunk).

Ah the replays... I've got hundreds that would be worth watching again, and editing together. TM's gameplay will never ceased to amaze me...

And then for me came the time of projects leading. First it was the JaV-inspired Nadeo Reverse, which was really well received (thanks EDGE and the others!) and then since 2014, thanks to MrLag, Nadeo EnviMix. I can't believe how much activity this project created... 2,500+ maps, and I-can't-imagine-how-much replays uploaded!
Of course now, it is mostly about the TitkePack, but I'll let that to BigBang1112, as it is his accomplishment first of all!

So, which to choose? How to choose?
After all maybe it's all that TrackMania time (I wish I knew how much exactly) that makes one long and sweet memory...

I'll never thank Nadeo enough for that. You're doing an incredible job for 15 years. Don't ever stop please!

This is just a video game they say.
No. This is TrackMania, and it is so much more.


(Oh, and there's also this ESWC pick-nick video where players are mockingly kneeling before Hylis, who is holding the garbage)

Got the news a bit late but HAPPY 15 YEARS!!

Even though the community isn't as present here in South America I still enjoy the games to death. So glad it's alive and kickin', hope there's still new things down the line for ManiaPlanet and beyond!

"Life is nothing but an illusion caused by not partying hard enough" (Andrew W.K.)
Top

Well a bit late (imo) but here's my present to TrackMania^^: Happy BIrthday

Hello all
I started TM from day one but i did not have the internet, but couple years later i was already Dreaming of maps to be made and shared with the community then everything changed for me on TMU which was the game that made me have so many friends and still have them to this day.
Couple of the older friends are not active no more but we are still talking on facebook and other social media sites and good old email, even make the NewYear phone call !

15th Trackmania Anniversary Map
"sorry" its late but i wanted something very special and its took me since the closed beta to think and make this map, along with the updated version of Ozon's mod which he said yes to let me modded it "thankyou Ozon" at that point i knew i wanted to add a mood "night" as a back drop from the Aurora Borealis / Northern Lights also at the same time i wanted the day mood to look dark blue making the white clouds stand out even more, not only did i mod the other 2 moods but also the Train Engine to a Green color.

Info about whats in the map
Behind the start line is a special event, that triggers a media clip which is over 3mins long this is my way of saying Thankyou to Nadeo / Ubisoft and the Best Community for the last 15th years on Trackmania.
The map comes with full media, full intro and stunning outro, music so turn down the engine sound and turn up the music bar the mod and special event works as one, But i feel the in game special event is something close to my heart and something i always wanted to make, which is why i have included this map as the Anniversary of 15 Years of Trackmania. 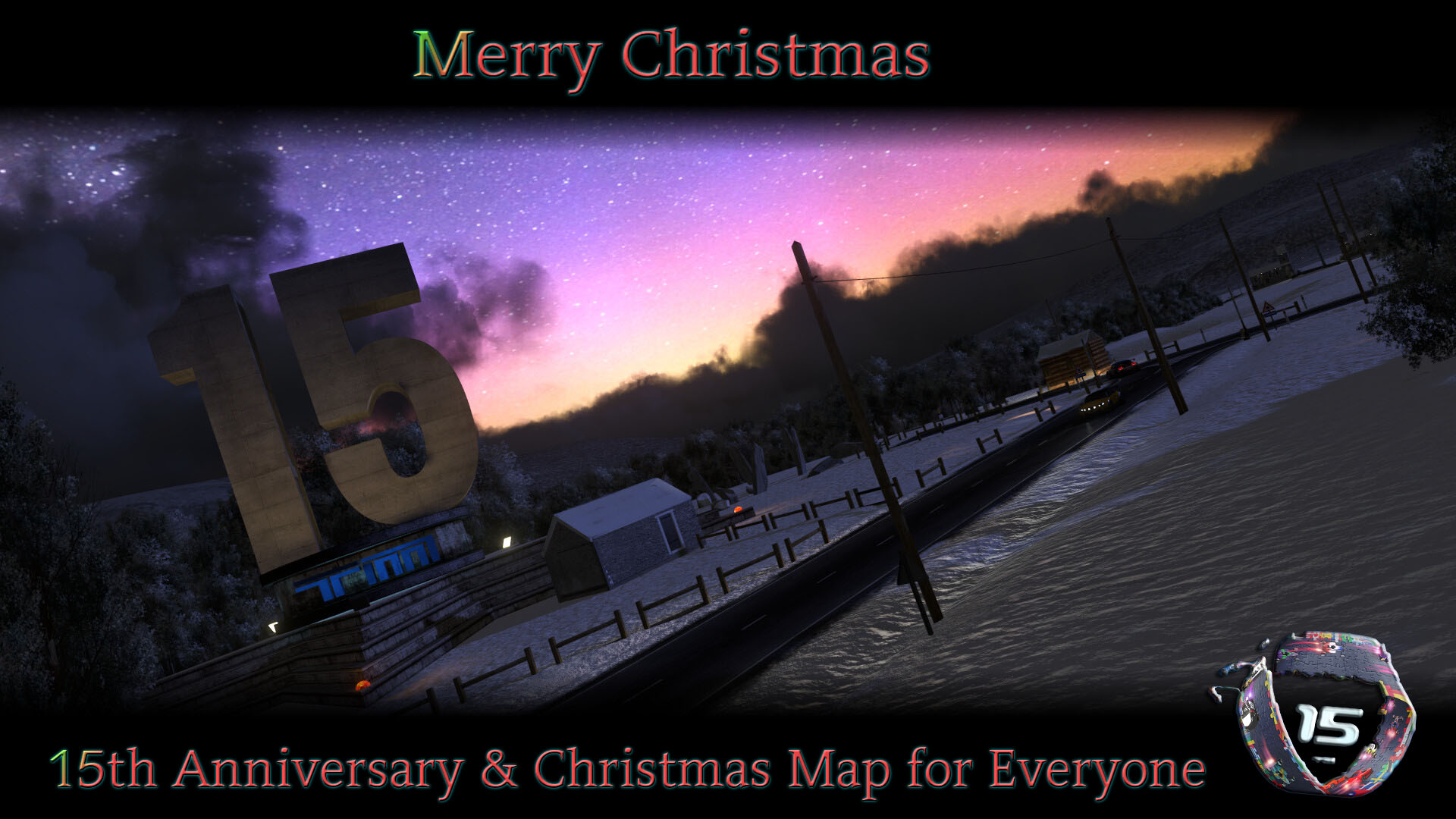 OOOoooo i am too late for the Comp, well if you's do not know me check everywhere on the forums its super rare i try to win things, Nadeo as already giving me the best thing every Trackmania and Friendship