It's not even a fan trailer, silly, they just copied from the german game magazine "PC Games" preview, as I recalled the narrator box...
https://www.youtube.com/watch?v=v0naTl9mId4
Top

It's not even a fan trailer, silly, they just copied from the german game magazine "PC Games" preview, as I recalled the narrator box...
https://www.youtube.com/watch?v=v0naTl9mId4

Isn't a fan trailer a trailer made by a fan? What other resources are available to fans?
Top

It's definitely a fan trailer. This is the same type of thing I made back in 2013 before Valley came out.
Nice trailer too! Nice to have some of the gameplay footage compiled into one video. Thanks for sharing!

About the new pricing model... I'm all for it. I'm glad to have a way to support my favorite game on a more regular basis. And I think this will be a good thing for TM in the long run. It'll allow the game to support more regular updates, and lessen the need to move to a new game all the time, which is a common complaint of people with "splitting the community".

I know it's a big shift in the way people are used to playing Ubisoft Nadeo games, so I hope people can come around to it and see the value in it. Looking forward to July 1!!!

It's not a lie, it's an alternative fact.
Top

Demented wrote: ↑
28 May 2020, 15:06
This might be it for me guys. This isn't a model I can get onboard with.
I've been kind of on the fence lately anyway with some lingering issues plaguing aspects of the game and waiting for a good boost in the right direction to reinvigorate my Trackmania desires again. But, unfortunately for me and my gameplay style this takes it in the wrong direction.
I still love Trackmania and the people here, and will likely remain in the community and will keep my eye out for new products or developments from Nadeo.
Good luck to all the development team + Hylis & Alinoa and a great community of players. I feel like I've made some true lifetime friends in here.

I don't understand this kind of attitude. Yes, it is a subscription model (no matter how hard Nadeo or Ubisoft try to deny that), but there's a good reason behind it. Hylis explained it - this game is supposed to be the ultimate Trackmania that they're going to develop constantly. The goal is (probably) to unite the community again with the long lasting game, like TMUF was. In the end, though - you have to admit it - Nadeo as a studio needs to be sustainable, and that's only achieveable by either rolling out new games every 2-3 years, or by a subscription model. Microtransactions are also a way, but in a small community like TM's, it would be seen very negatively. The pricing is fair, too. So where's the problem for you, Demented?

As for me, I'm waiting with (pre) ordering the game until I hear more about online play, customization and community's place in the new world of Trackmania. What about ManiaExchange, ItemExchange, other content-sharing centers that the players have developed throughout the years. I hope Nadeo will give them an opportunity to create stuff in the new game, like they do now.
Top

Nymix, some answers here. It is difficult to do into all details here.
1. At the moment, it is 2D skins. The model is much more complex at the moment and I still have to take decision on 3D skins.
2. You need at standard or club access to connect to custom rooms, including dedicated server
3. Room are now either hosted by us (Turbo) or by the player (classic) as he wish. Some features are only available for rooms, like being able to scale, but some will probably be only on dedicated, thanks to controllers etc.
4. Standard or club edition can play others tracks either through club campaigns/rooms or files. All map, even shared with files, will be registered with online records in our databases.
Top

kidmaciek wrote: ↑
01 Jun 2020, 21:51
What about ManiaExchange, ItemExchange, other content-sharing centers that the players have developed throughout the years. I hope Nadeo will give them an opportunity to create stuff in the new game, like they do now.

MX has already announced that we'll have a new track sharing site for the game. We're also kind of returning to our roots, just like the game is, by calling the new site TrackMania Exchange (TMX for short).

And yes it will support custom items and blocks.

Keep in mind that we are just finishing a lot of things and that it's complicated to say everything that will be on day one. I know we are mainly trying to know if the game is worth, so it would be better to be all accurate on everything, but as you know, Trackmania is quite a complexe game and that there are so many open/custom features that managing them all for a new launch/infrastructure is quite a huge challenge.
Top

Nice to get some addiditional infos for the new game, keeps the interest into it high!

But i have to critizise one specific quote from here. It's about the meaning of the game as an annual-priced game and the denial of being an subscription-based game.

It's about the marked quote here: 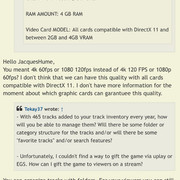 And it can be viewed from one perspective to another. But technically it is an subscription-based model. There's no matter of saying anything else or the fact it isn't auto-renewing the thing or it's yearly instead of monthly. But i would be fine with it. Because then you get articles and responses like this:

And that is ONE ARTICLE.
i'm sad that people actually insulting a great member of the community because he defends the whole model and bashing anything about Nadeo and Ubisoft at all, sadly regarding only on this subscription thing. That doesn't mean i'm not disagree with it or you shouldn't continue it. I just want to say that with such an experimental model you should be aware that this quote can be very dangerous. And i don't want the big project not to suffer before it even got released.