All the events created by the community

14th of August 2013 - Bluetooth decided to host a SmurfsCup in Royal. Barely 10 players joined.
One month later he gave it second try and 30 players jumped in! From this day on the SmurfsCup Royal got hosted (almost) every Sunday.

5 years later - Despite the game lost the majority of it's playerbase, the SmurfsCup Royal is still very popular. Like fate is giving us a wink, the 250th SmurfsCup Royal will be hosted on 19th of August 2018. So almost exactly 5 years after the very first Cup!

5 years are a long time and thanks to some work by Tilli-Klaus we now have some statistics to share with you!

- At this point 2184 different players did join our cups!

- The top 10 players that got the most points in all Cups together: 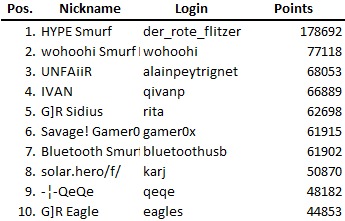 - The top 5 players that won the most Cups so far:

To check all statistics of all 2184 players that played so far, download this excel file: Statistics of 250 Royal Smurfscups

On the 19th of August we want to celebrate 5 years of Royal SmurfsCup together with you at the 250th SmurfsCup Royal at 8 pm CEST!

Like in previous cups of this kind, we will pick the five best maps we can find (they are yet to be decided and will stay a secret until the cup), rise the player slots on the server to 32 and the point limit of each map to 300!
As additonal prizes we have something very special this time. Nadeo was kind enough to sponser 6 maniaplanet goodies. Half of them for the best 3 players and the other half of them will go to 3 random picked players that played all 5 maps!
HYPE Smurf

:hype:
Let's hope we will get enough participants.
Come on people join the cup at that date.
Top

Oh boy! Only one more week!

Yeah i am also really excited for it