null8fuenf10 wrote: ↑
01 Feb 2018, 13:23
Never heard from this two Titles. Are they still available?
And sad to hear, that you leave TM/MP, but i understand life must go on.
+ NADEO and the actual Playerbase don't give the feeling to me, that there will be a better Future in this Game.
So, I'm thinking about leaving, too. But i will wait until next update/bugfixes and look in what direction it all goes.

I didn't say that I will leave the game completely, I will just give it a break, I want to learn C++ programming language. After that break I will be back with some scripting skills (maybe) that I might use in MP.


null8fuenf10 wrote: ↑
01 Feb 2018, 13:23
Then i have another Question at you.
What do you mean. Would it be possible that a Person (talking about me ), who has no knowledge about Modding, Textures, Photoshop and all such stuff and without studying such stuff, more then maybe 3-4weeks, can create a Mod for TM2? I mean... Is it easy to understand, with the right Tutorials?

And would it be possible, that a Mod created for another Enviroment, could be used/transfered to another Environment, with few or less Modifications?

I don't think so.

---EDIT---
-Found bugs:
-Puzzle maps are unable to load, because they aren't included
-Desert/Terrain/Hill3/2.item gbx has hole in it
-BayA3 has a broken intro
-not possible to build a Stadium track in custom menu, you need to use the old one

these bugs will be fixed soon

i played yesterday a bit. But, sry to say that. The handling feels more bad, for me, then before the update.
Island feels extreme bad and unplayable. Coast is too fast and the sliding from original is missing. At Bay, the car feels too heavy.
To Rally i can't say much, i played a Track where you drive on this white Woodthings, at the beginning, and the RallyCar where sliding much heavy. Don't remember such behaviour on TMU. And Desert feels in some ways better, but in other ways it feels more different to TMU, then before the update.

Maybe it could be better, when optimizing the Enviroments handlings one by one. And not to change all the handlings, with one update.
Work on optimizing, maybe Island or Coast. Cause at Snow and soon at Desert, you have a very big competitor, with the TrackmaniaOne Project.

well, you can change only 3 parameters - acceleration, turning (no doublewheel) and gravity. You can't change things like sliding, doublewheeling, camera, etc
You can see in this video how to make your own physics in MP4: https://www.youtube.com/watch?v=7_QZIdHhakA
/\rkady

An update was pushed tonight

Image of Puzzle mode (a mode by TGYoshi, edited a little) 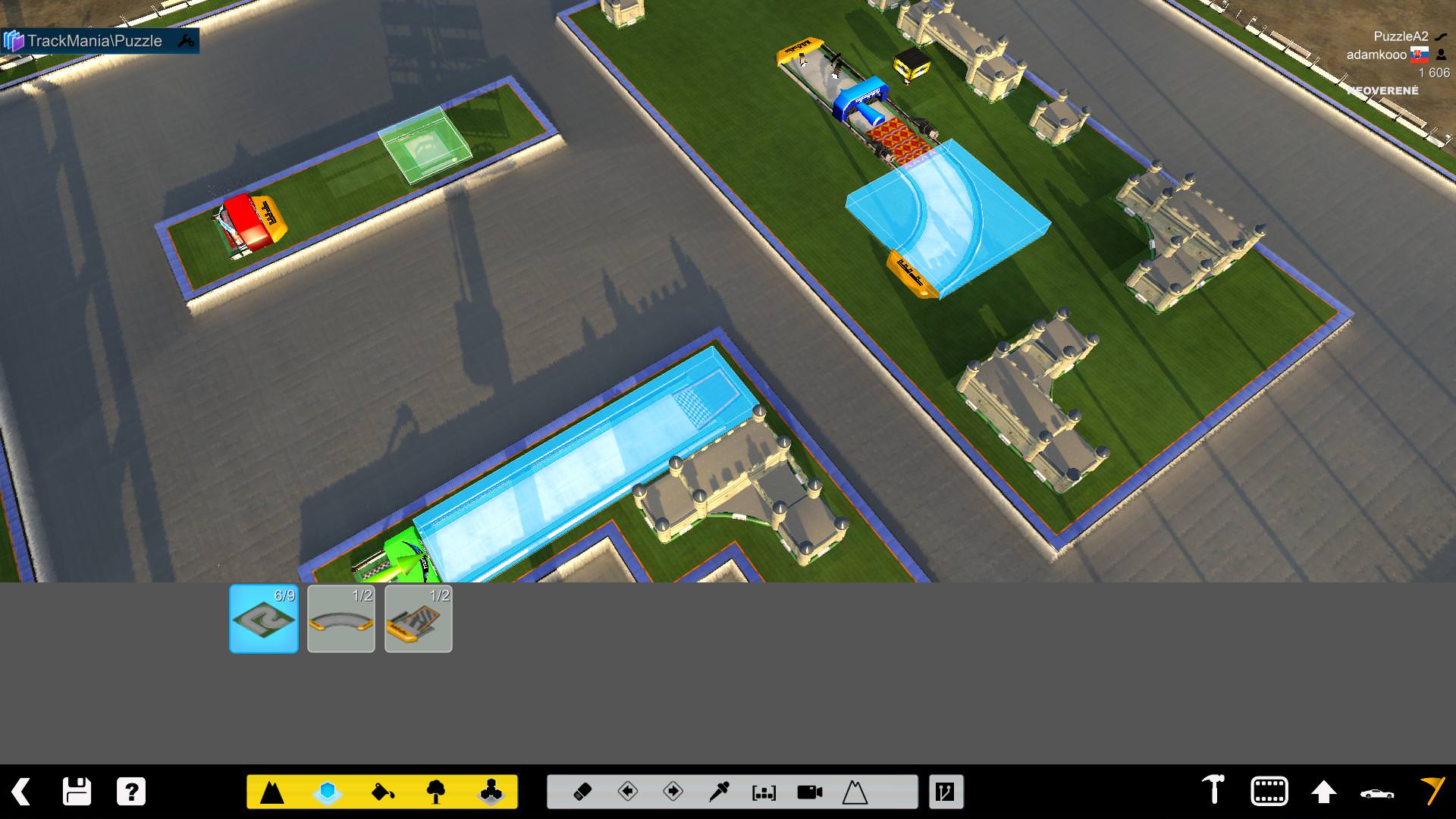 so I need to buy Valley for this title...?

so I need to buy Valley for this title...?

No, just Stadium.
You need to load it. If you don't own Valley, wait when a Valley channel will be available, just go there and go back to the menu (it will load Valley environment), then you can play TM2UF titlepack.
/\rkady

Nope. Can't load the title without a valid Valley key.

After Installing the TM one title, MP asked me to type in my Valley key (that doesn't exist, cause I don't have one). At least it's useless without owning Valley.
Top

After Installing the TM one title, MP asked me to type in my Valley key (that doesn't exist, cause I don't have one). At least it's useless without owning Valley.

The topic is about TM²UF, not Trackmania One in case you missed it ^^
TMOne requires valley and it runs on pure valley, TM²UF requires stadium, but you have to load valley in cache first, so play a valley program in order to enter the TM²UF tp.
Creative Director at unbitn studio - 3D Modeler for Pursuit - ManiaExchange Crew - ManiaPlanet Beta tester and Translator
___
MB - AM3+ 970 Gigabyte GA-970A-DS3P
RAM - 16GB
CPU - AMD FX-8320E Enlight-Core
GPU - Nvidia GeForce GTX 960
Top

I still can't get the gold medal on Snow A4. Have you re-validated the maps?
Top
Post Reply
487 posts