I have been having this problem randomly for 6 months now:

1st problem: when I launch the game, the screen remains frozen on the maniaplanet logo.
I tried to clear the cache, install new ones, the games, nothing fixes this problem! Sometimes after 10 minutes it unlocks and I can play games.
(when I launch an environment via steam I am not this problem (I specify that the maniaplanet and steam folders are on 2 different disks so as not to cause any problem)

This problem occurs in any title pack, and only when I start the game for the first time... these same feeling when you turn on an old car the time it heats up to move forward

thank you for solving these problems.

I specify I have already removed all the files delivered all my files ( texture, mods, skin, screen etc...) with or without this creates the same problem via my bug list stated here above

Re: first problem - since you have Openplanet - while clicking the start button on the Maniaplanet launcher, hold down the "Pause" key, which will make sure Openplanet doesn't load (as long as you have the latest version of Openplanet), and you can make sure it's not an Openplanet issue.
1070 GTX, Ryzen 3700X, 16GB RAM, Windows 10
Forum moderator, opinions are my own.

Thanks miss for the details

But I already disabled open planet because it doesn't always work, when it updates on maniaplanet
and yes, it's not an open planet problem

the problem is always present, these often the case when players have a lot of skin, map texture, mods to load I think.

Would it be possible to ask nadeo to optimize their games? on these 3 points : start, 1st entry in the title pack and when you leave the game.

(it's just frustrating if the game can't cumulate more than 10 skin, 10 map, 10 texture at the same time)

That doesn't sound realistic. I definitely have way more than 10 skins, 10 maps, and several mods and the game starts fine for me.
1070 GTX, Ryzen 3700X, 16GB RAM, Windows 10
Forum moderator, opinions are my own.

Configure Process Monitor to capture only ManiaPlanet.exe events.
Then take a look at what operations ManiaPlanet is performing during the period when it' s not responding.
Top

Electron wrote: ↑
29 Nov 2019, 22:20
Configure Process Monitor to capture only ManiaPlanet.exe events.
Then take a look at what operations ManiaPlanet is performing during the period when it' s not responding.

Yep this is a great way to figure it out!

Hello , thx but I don't know how this tool works. I installed it but I can't sort maniaplanet from other applications

he could solve the first two problems maybe.

1. Scroll down until you find a line with the ManiaPlanet.exe process (or press Strg+F to search for it).
2. Open the context menu (do a right click on that line).
3. Select "Include ManiaPlaner.exe" to set the filter.
4. Scroll down to the time stamp where the game is supposed to lock.
5. Determine what operations the game was performing. 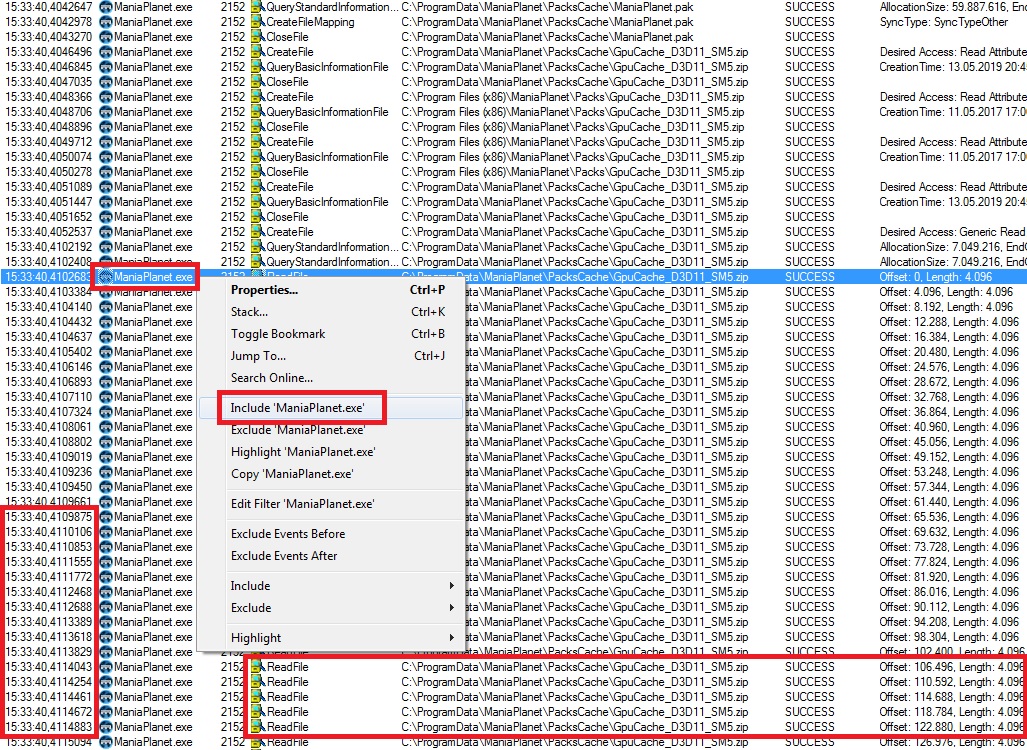 he could solve the first two problems maybe.

If you notice that the game reads your Autosave or Mod files at point 5, the following links may be helpful:


For the 3rd problem it happens to all my friends when they play more than 1h it would be necessary to inform nadeo so that it corrects this, because we can't close it manually

Hello thank you for this image tutorial.

I cleared the cache again!
for the first problem:
During the bug in the'mp' logo sometimes it works sometimes it freezes the game completely, I haven't been able to reproduce the freeze since the cache was removed

For the 2nd problem:
I tested it today after 5 minutes maniaplanet freeze when I enter a title pack:
I was forced to stop the game because it caused all my PC and also the process monitor software to crash.

I clicked on the title pack at 11:13:15 sec
I noticed that it reads all the autosave in the environment, I must have + 200 replays, maps etc... and it takes more than 5 minutes with a global freeze of the game and my PC (force to do ctrl+alt+suppr)
I should point out that I have disabled the cars on the game.
At the end of the freeze these finishes at 11.17.38 when mp has read all the files of the game..... Awesome!
none problem with point 5

Thank you for your topic but you propose not here a resolution of the problem but an explanation of the problem, which allowed me to understand that it exists since the launch of mp3 ( since 5 years) and that nadeo does not put itself in the place of the ex players:

For the 3rd problem:
I have disabled the autosave again I will see if it works.

In general this problem is unbearable for the player's experience in the game (not everyone is lucky enough to have a ssd.
Nadeo would have to urgently fix these freezes, bugs, caches, lags, etc... ( the player has the right to use these autosaves enabled this worked very well under mp2, it would have been preferable for nadeo to communicate without their games the different instability via their updates)

Today they are in development on another game, but if they do not know how to modify the nucleus after the game they will have the same problem with their community ( ex: turo on pc) .

Your topics demonstrate once again the non-support of nadeo in their community ( 5 years this problem exists and no resolution / optimization of files for players using a hdd disk)... or read the files ( replay map mods etc... once the player wants to open it in the game)

I notice that they do not know how to manage their priorities with regard to their community and those since mp2.

Return to “Support and technical issues (not bug)”