hello my fps are locked in the game i have 60 fps locked and 100 fps when im changing resolution i dont know why is happening i have vsync off and everything low.. i put 0 fps limit in the settings and doesnt help..
Top

I guess we found our mutual response then. I personally want vsync to avoid any tearing and despite the settings were set on Vsync full and frames limit to 60 as before (i didn't change anything in fact there), it wasn't working.

So i guess it's either a translation error or a total inversion of what it should be. Just activate vsync to not get vsync, and i'll disable it to get it then o/.
Edit : Yep, that's it : I put VSync to "Aucune" (en: None), and it works now.
Top

Yee must be update issue i today run tm turbo and here i hasnt this issue.. I have there 90 to 140 fps while playing map so ofc its something with update..
Top

Ok i think i fixed my issue i thought i have 4gb ram .. Ok i run maniaplanet 32 bit version and there we go fps are unlocked so 64 bit is bugged if you have 4gb ram..
Top

I'm not able to reproduce the issue (the fact the VSync can not be enabled) (tested on 64b version with more than 4Gb ram).

Could you post more details: are you talking of in-game synchro. settings or launcher one ?
what's your hardware spec. ?

Note1: MaxFps is ignored when VSync is enabled (enabling both is a bad idea).

Note2: MaxFps=60fps is not the same thing than VSync=on+display_at_60Hz
(even if the 2 frequencies are close there is no guaranty that MaxFps=60 will be synch.with display, then you may see slow tearing line moving)

i have cpu i3-2220 4gb ram and 1gb radeon gpu also +2hdds
in 64 bit vsync isnt work properly in 32 i needed run game to unlock fps issue..
in 32 bit i haven't that problem and i can play normal..
settings i have normal im not touching my settings until update broke my fps issue so i run 32 bit and issue gone away..
i have 150fps limit in the settings
IN Turbo i hasn't that problem
Top

Are you sure you have no driver override things for the VSync ? (check in NVidia game settings)
(that could be dependant of what .exe is run)
Top

I don't want to hijack the thread or anything, but per request of Alinoa i'll also give my feedback here though my issue is somehow the opposite to the one Kulisa has, aka i want Vsync to avoid any tearing (so it'd limit at 60 fps) and it doesn't work, cf. my thread, while Kulisa doesn't want vsync nor any frames limit.

So, for me at the latest situation : Vsync doesn't work at all in the 64 bits client. At first i though it was good and that it was indeed a translation issue, until i played and saw tearing. I knew vsync was still off and only the frames limit was in charge.

I'm talking about in-game "V-Sync" setting. It was always on. But cf. my thread after the update my frames weren't capped aka no vsync despite the setting was set on "Full". I'm not even sure why there's now 4 settings for the VSync (None, Quarter, Half, Full). I always saw this setting as either On or Off in every game. Maybe that's the issue. Nevertheless, it works just fine, as fine as before in the 32 bits client.

MaxFps is set at 60 at it always was but as you said, it's ignored if VSync is enabled. So i don't see why it'd be a bad idea to have both if it's ignored anyway. In fact, V-Sync set at Full or None with the Frames Limit set at 0 (infinite) or 60 gives always the same frames result (inspected with ctrl+f11 : ~140 in the menu i was), except the combo V-Sync set to None with Frames Limit of 60, it indeed limits to 60 frames there.
And yeah i'm well aware of the note 2, i was just testing stuff because i thought of a translation error with Full / None. Tearing made me know it wasn't.

For the latest question, i've no override at all on this. I play all my games with V-Sync On to avoid tearing. Except Super Hexagon where i had to support tearing otherwise the input lag was too important.
Top

In my amd settings i have vsync off
Top

I've installed an AMD 470 to try to reproduce your issues (as you've both AMD hardware).
But I still have VSync on/off according to what I ask in config.
I'm using the 64b exe. 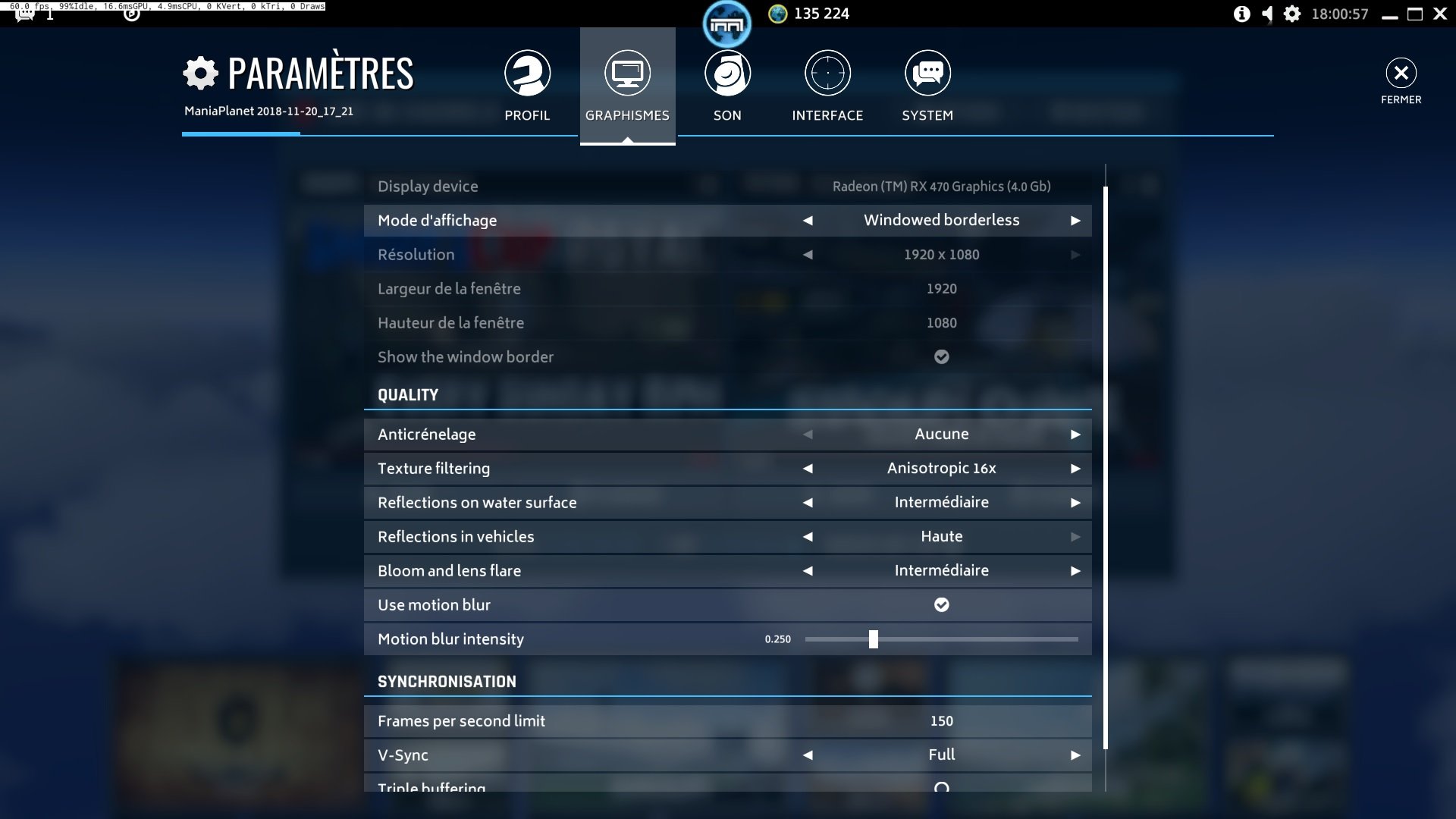