How does PlayTime work?

How does PlayTime work?

I am very curious to find out how much time I've spent playing trackmania, and while going home for Christmas I found an old scores file for trackmania. But when checking out the stats ingame I came to something strange.

This page has always made me confusious to what it actually is trying to say, but i do believe "Play time" is supposed to be the overall total for edit, racing and network. But the problem here is that the numbers just doesn't add up. I also believe that this page doesnt show more than 1000 hours so it just cuts out the number which is higher than 100. (Which is the reason why this picture is from TMU and not Maniaplanet. I do not have over 1000 hours in a title there but it is the same premise).

Can anyone point me in the right direction to finding out how many hours i really have? I do believe that I have more than just 1000, so I cant just assume that i just need to add 1000 to the total amount shown in the picture.
Is there any way to open the gbx file and find the values there since MP/TM wont show the full number?

It's weird anyways without proper units

That would actually be a great thing to now.

E.g. looking at my Canyon stats, I can say that the 1000ers are definitely cuttet away somehow. Maybe some kind of overflow
How else should I play 2600 maps in 23hours

@Tmarc. I think it is hhh:mm on the pic below 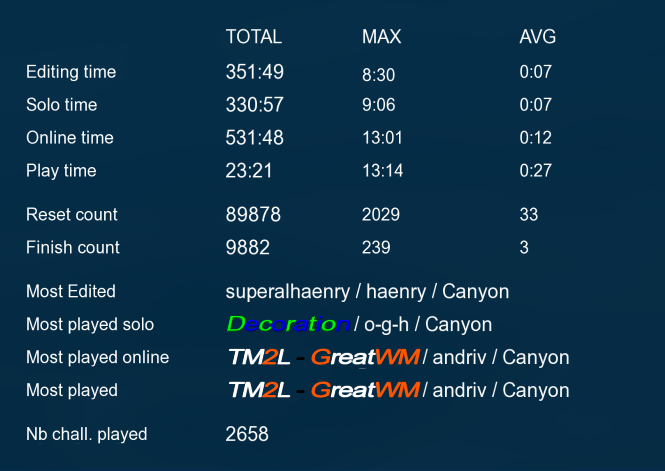 yeah, hhh:mm looks probable.
Perhaps it is simly the text field which is not large enough, and that visually cuts the numbers.
Users with menu / title pack system know how could tell...
maniaplanet forum global moderator

For the TMPluse Titlepack the three rows editing, online and solo time sum up nicely to match the value of Play time

actually it sums up to 35:48, but the columns don't show the seconds, which could add up to the remaining 2min of playtime

so something has gone horribly wrong in the upper pictures for united an canyon, because the values do not add up at all. Even if the 1000ers are neglected, the last digits should still match, but they don't 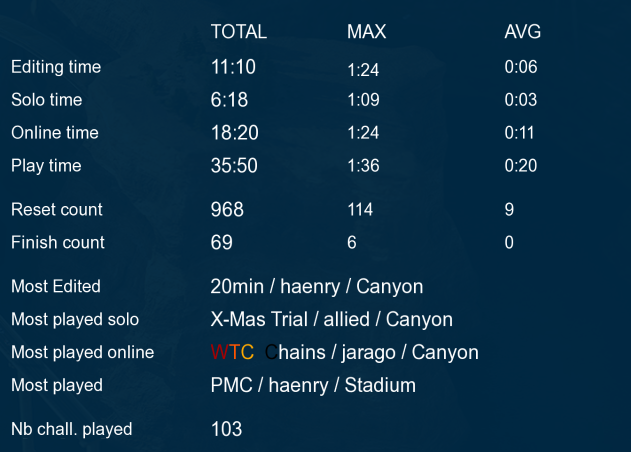 
Here is mine from Canyon alone. 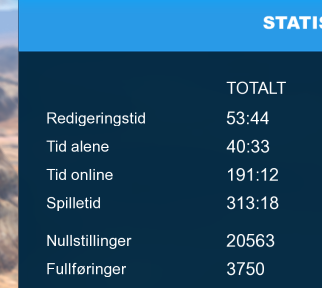 I have no idea where the missing hours are

Oh boy, there's a thread about the broken playtime!

Yeah it's pretty broken, which sucks because I'd love to know how many hours I really have in the game..