Almost every week I see somebody complaining that the UI of Maniaplanet is badly done. Please explain me why in detail. With examples please!

In my opinion the following points where downgrades:

- Map/Replay selection went way more complicated with the new look, it was simple and easy before.
especially because of the "big folder" look, I had no overview anymore and always have to switch to the "kinda" old style, but it still wierd me out so many times
Top

Exact. One has to try to find things in the UI, E.g. when you want to create a new map, you get first a file selection menu where the new button is hardly visible, if you don't know how the menu behaves.
Similar for the local play. The menu is only for experts, but there is no "quick play" button, that takes the last settings, or does all the stuff with basic campaign, so the user does not have to hassle?
After all, lots of kids are hopefully playing, not only adults.

Also the channels, even if it is a good idea, but why can't one filter the list e.g. for base title type, like Lagoon?
maniaplanet forum global moderator

It's not just the UI that is bad, it's the whole user experience (UX).

It's best to start with this: This whole screen is extra, it's not necessary, except, and this is where the problem lies, when you need to change almost any setting in the game

After that you get the login screen: Yes, it is optional, but you need to actively turn it off, also without it i don't know if you can go silent or offline

And now, finally we're in the game. Oh, no wait what is this: Another menu, what's this one for? Well to choose what game to play, also this one is the worst.
Imagine being a new player and seeing a menu like this for the first time, the last two were at least understandable, this is just a mess, what is clickable, what does what, what does channel mean, what does station mean. It's a mess that no new player can understand at a glance. Ok, we're in the game. Wait what, all the steps before this were actually unrelated to the game, only now have we actually gotten in the game menu.
This one actually looks good, seems intuitive, why couldn't it just be the one to show up when we start the game?

Now we diverge, most new players would choose the solo play first, let's check that out: What's this? I want to play the game, i want to see what i bought, not some silly rankings. Yes, it's a competitive game, but rankings is not be-all and end-all of the game. (i honestly hope this screen is here because i finished the campaign)

If i ignore the rankings page, and assume that new players first see the white campaign, it's not bad from here on out. You choose the map you want to play, the enemy you want to race against and play. Personally i'd much more prefer all 3 ghosts at the same time, so with that the enemy pick option is skipped, though that is a useful screen in it's own right. I would just move it elsewhere so it doesn't intervene in the new player experience (my 2 cents here, the rest of the UI is awful would need a lot more then 2 cents to fix it).

Now back to the online mode, where we expect the player to spend most of his time This one is also not that bad, i mean, there is not much you can do with the server list. Yes, it could be improved in several ways, mode filter is really bad, and the all modes button is a bit too hidden, echelon and levels mean nothing. All in all could be much worse, so it's good for what it is.

After all that, and we found a server on which we want to play, clicked join and we're finally in the game playing. Yay us.

Oh and remember this is one of the cleanest routes in maniaplanet. If you want to do anything advanced, good luck. I clicked once on the shortcut to enter the game, and it loaded me into the menu. From here it's one click on the blue button to play. Simple as that.

To enter a server in shootmania i had to click 9 times!
It's 2 click vs 9 clicks, anyone can see the difference.
Top

Very good post Monk that you listed the example where to struggle with the current UI.

Still also outside of this game I see a lot of crappy UI's which are getting more crappy in the past. Look at Microsoft Office: each Release 2 additional Clicks compared to the previous one. But it "looks" prettier. So im not sure if the UI can be really fixed just because of some strange trends with UI's in general.

One good thing to say about the UI: the possibility to add friends and chat with them. In most other games you need some bad client in between to do so or you just join discord. Here i used it pretty often even if adding friends has become also more difficult because for some reason if i click somebody i see only his login but the button add friend is gone (in most to all cases).

P.S.: just came into my mind but one of the reasons for this crappy UI is the whole concept of titlepacks. E.g. Online Channel serverlist. I havent found a proper filter when searching online for interesting servers because a) the filters are not good and b) i have to search in each and every title! I have about 20 titles installed and even if the intention behind this that they should be games its like 95% of the titles are just mods and not new games. So in my opinion if the UI is reworked there should be a big discussion how to properly include titlepacks in the UI and not how it is now...
Last edited by McBain on 16 Jun 2018, 11:47, edited 1 time in total.
Top

Oh boy here we go. Time to list some inconsistencies and bugs.

Edit: Monk made a good post with screenshots too. I don't necessarily agree with everything, but it's a good summary of things that can be improved. 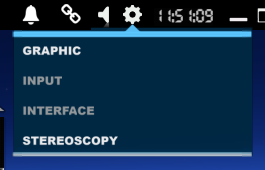 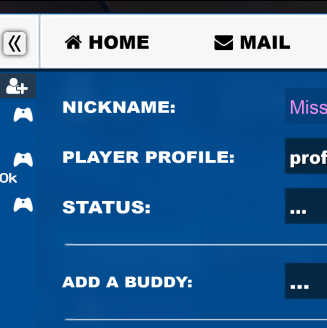 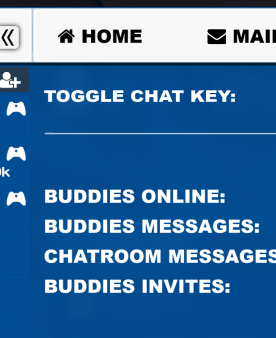 Not to mention the Mail button opens the old MP3 mail UI: 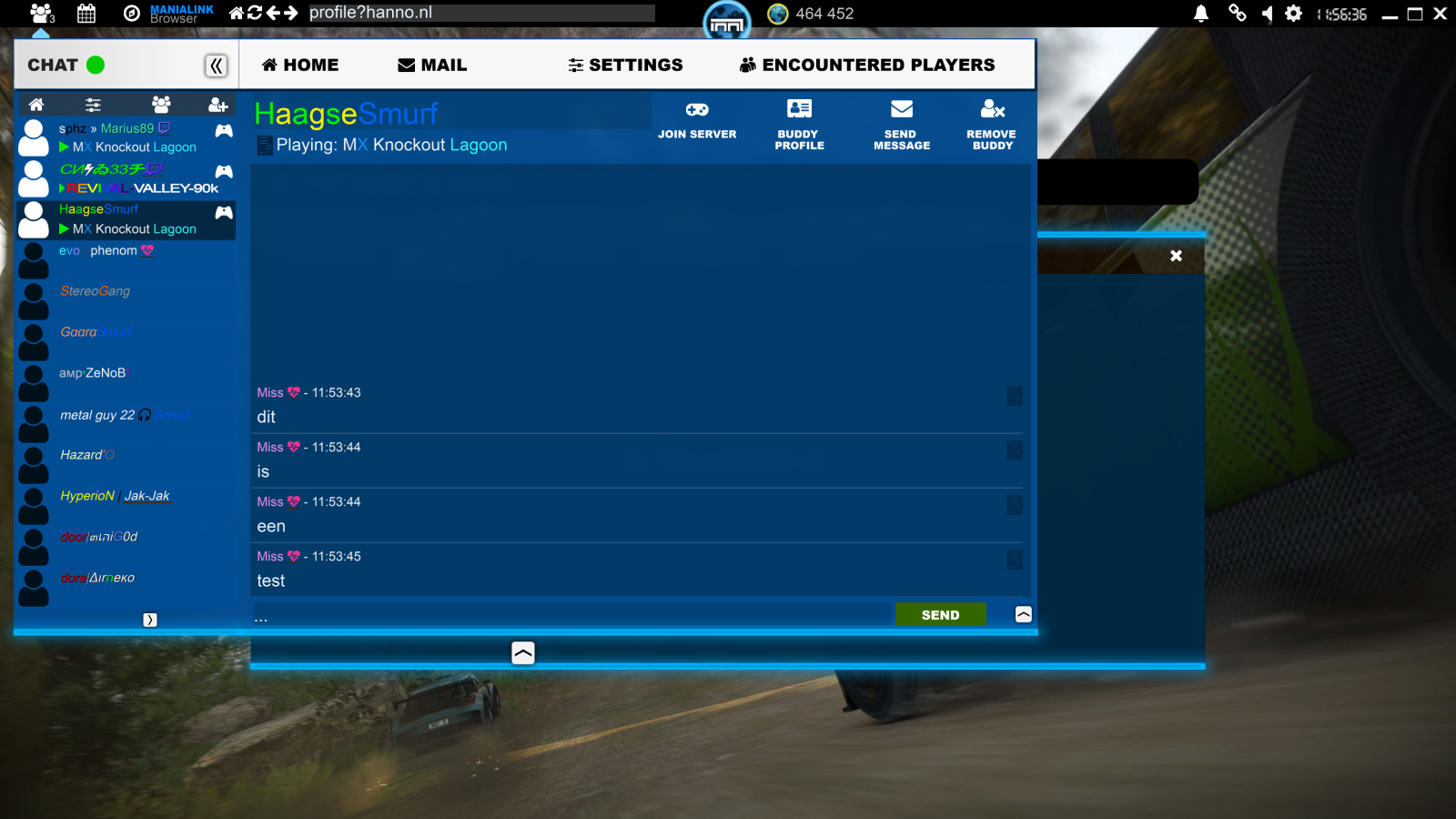 Inconsistency: Channels homepage? No settings button for changing your profile etc, you have to click on a title first. And why does that thing disappear when I click on Channels again? 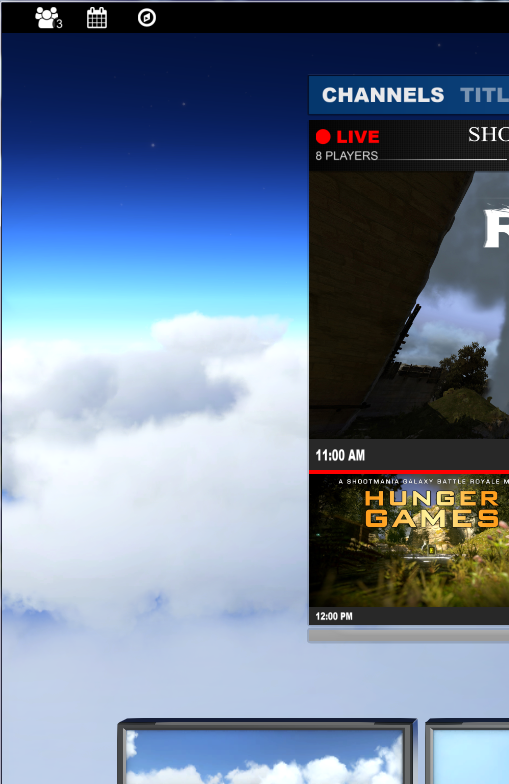 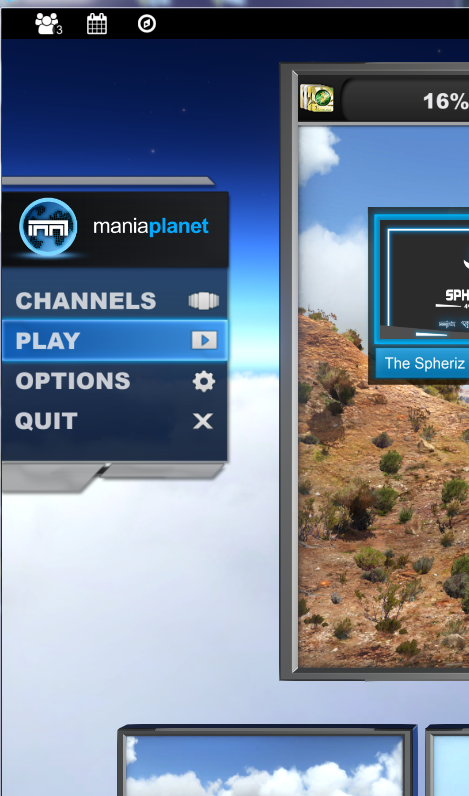 Opens this: (it's kinda weird) 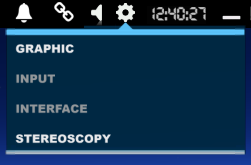 This serverlist is great: 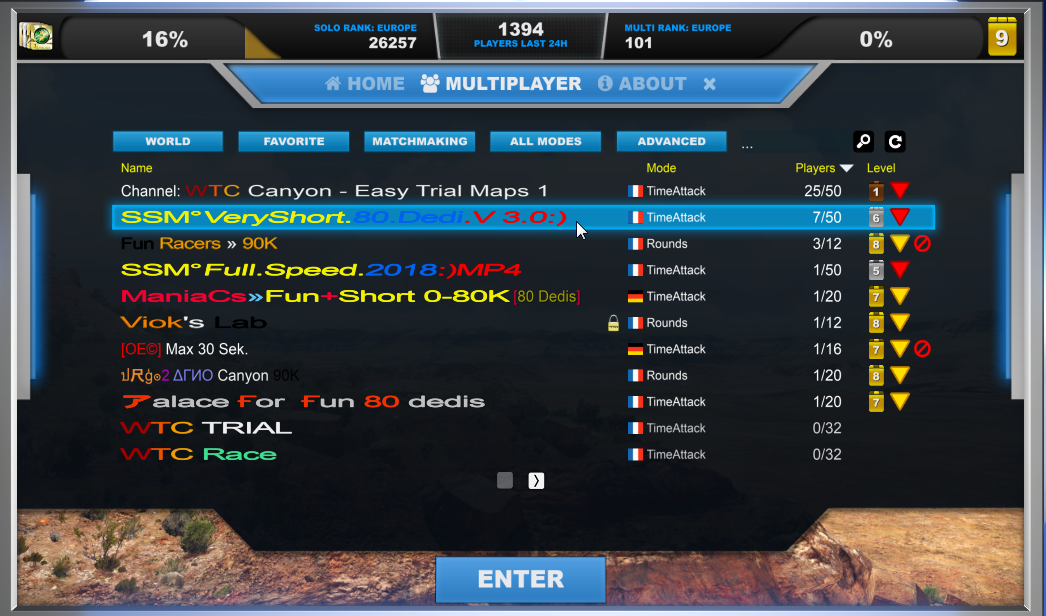 But why is this one different? (Inconsistency) 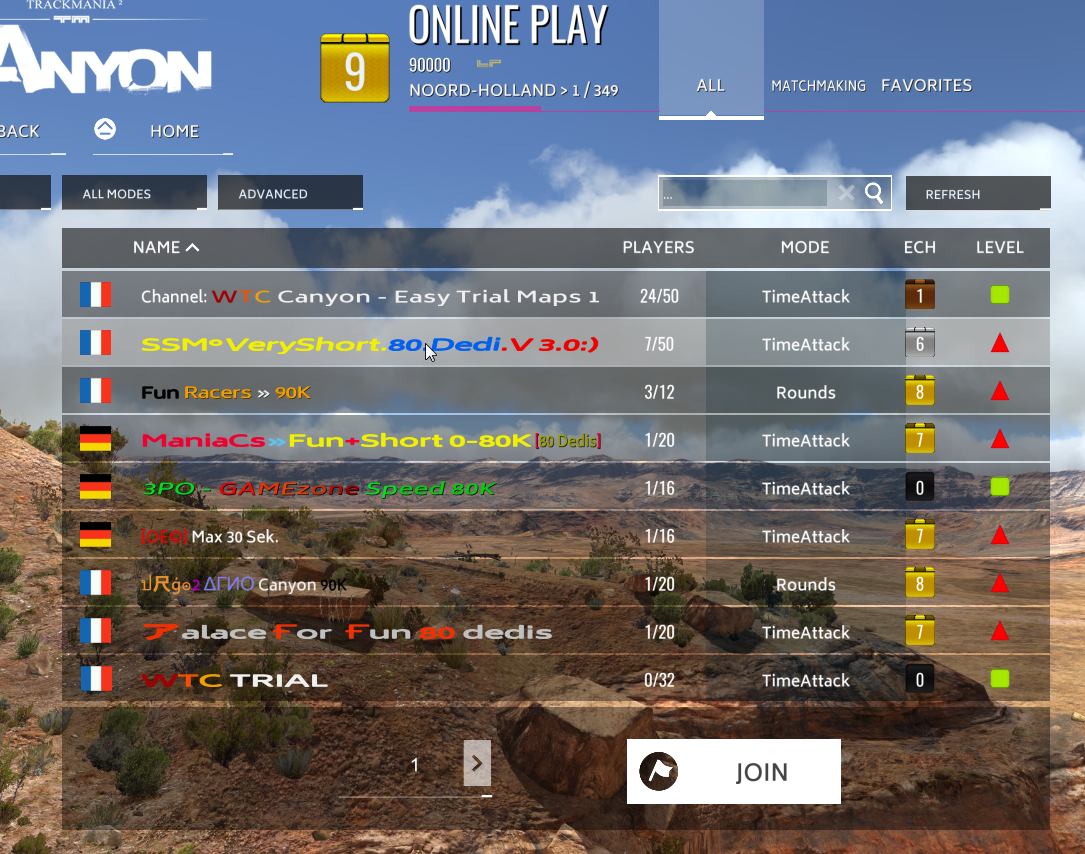 And this is also still the "old" UI with old buttons and such: (inconsistency) 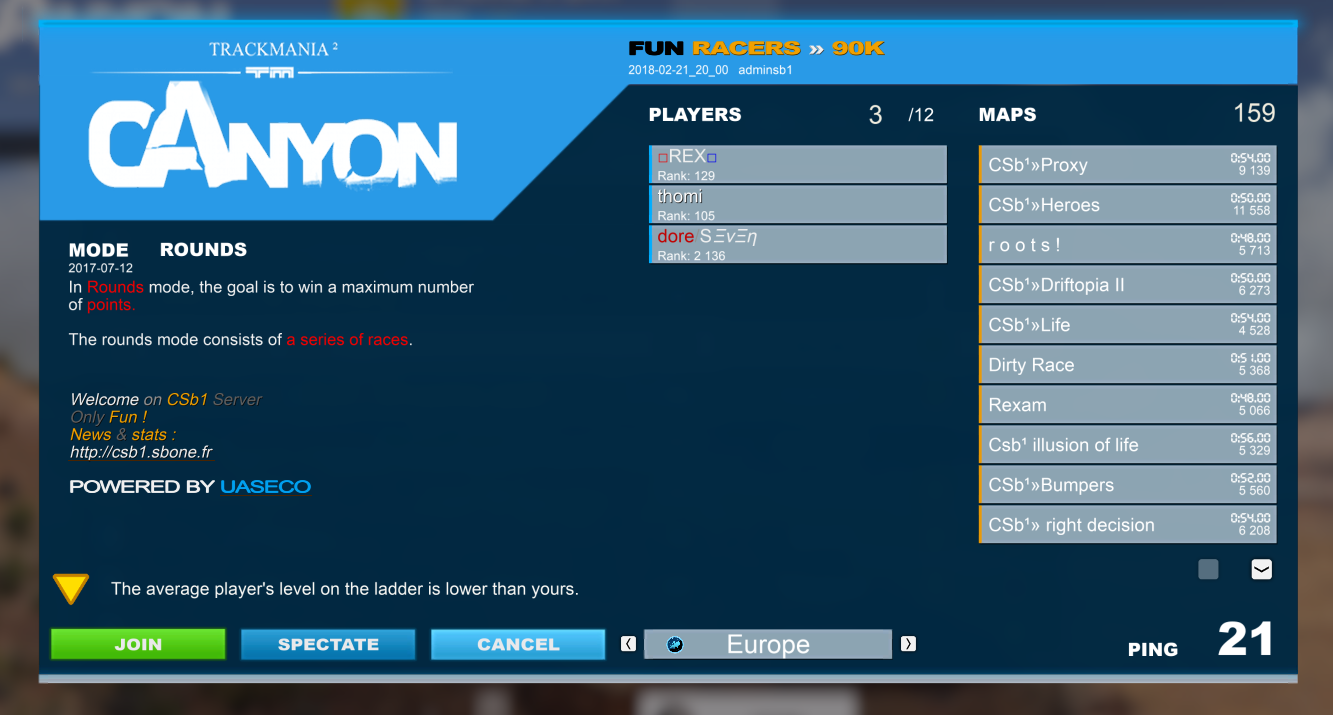 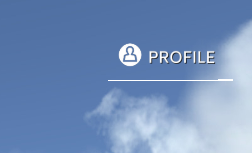 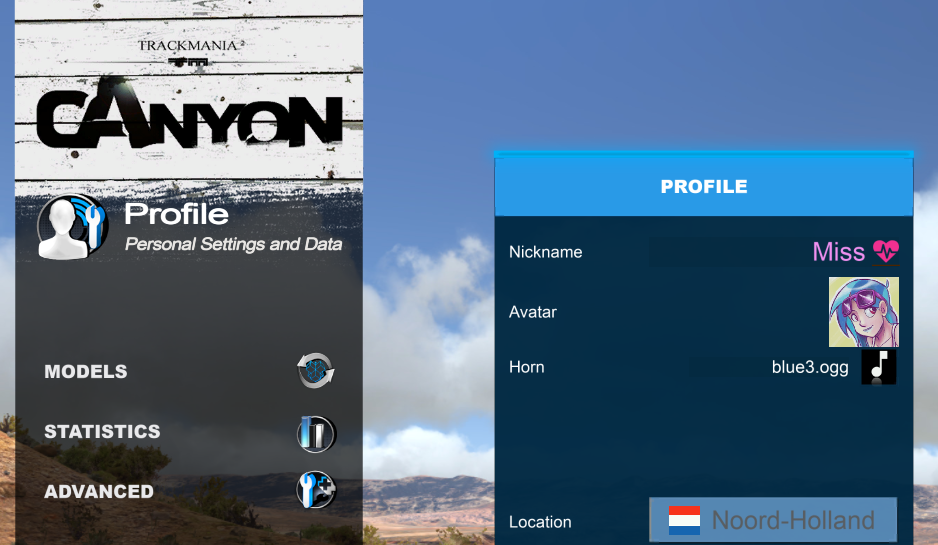 fully agree with you miss: i just say crappy UI is not a unique feature of this game and except some startup issues listed in Monk's Post its just pure ugliness but most of us can handle it.
Top

Ye it's indeed a mess... But I am wondering: How do you want to create a clean UI/UX if you have so much to offer? Maniaplanet has so many features. It's easy to say "create a simple layout" but not that easy to realize. For example games like Overwatch don't offer that much and therefore it's easy to create a clean & polished product in my opinion
Top

The only thing i dont see the same as you guys is the main menu with all titles.

I think its ok, managing titles with different content by personal preference.
What bothers me the most ist, that the community always has to help people for the most simplistic things. And that gets annoying.

No tutorials, not shot introduction to anything.
Take the unreal engine for example, on the first loadup it will show you the basic functions in a rundown by highlighting them with a circle and asks you to click it, to see what happens.

In the end, some tutoriuals/introductions for so many things inside of maniaplanet is something i wished for since the start.
We have so many people who get really deep into the whole subject and since nadeo has such a good relation to us, why not asking the community to provide Tutorials which would be highlighted at a fixed place inside of maniaplanet.

The manialinks, which show up ingame dont deliver the same purpose as a real "Tutorial section"
Top

I tried to look more from the most general perspective, while i agree with everything Miss has pointed out, i firmly believe that just fixing the inconsistencies and removing the stuff that does nothing is simply not enough. It would be much cleaner and easier to use, but it wouldn't fix the root issue, that for me is all the unnecessary menus the user has to go through to just play.
Remember, most people will just play the game, only a select few from those are actually going to engage the development side of the game.
As a developer you need to put more emphasis on developing a good experience for the line most people will take, then the side paths.

Oh, and to the Soprah, simple is the best, if you can't make simple you need to get someone with more skill.
How is Overwatch simpler then trackmania or shootmania?
I cannot see that point, in both games you join a server and play.

OrecaShadow, i agree a tutorial is a good idea, but it's just a band-aid to fix an existing hole.
This is a game not an engine, just think, how silly it is to have to make a tutorial for the game menus. Not the game itself, but the menus, that's how bad the situation is currently, how it always was.
Top
Post Reply
32 posts