This is a small week-one patch for both Multienvironment and Stadium titles.

Hello,
I only want to post a small disclaimer in regards to the fuel and race objective mechanics:

Customized Gas Stations and Race Objectives created by mashing the items with blocks via Mesh Modeller are not allowed and unsupported. The shape of their triggers is hardcoded in the game mode, any modifications done towards these items are very likely to break the player detection, resulting in the distorted variations of the items incorrectly detecting players or not detecting them at all.

Support for customized variants of these items is not planned due to unnecessary complications of the trigger shape detection, as well as keeping the consistency between maps by providing easily recognizable landmarks with specific functions.

Dommy wrote: ↑
15 Mar 2019, 12:55
Customized Gas Stations and Race Objectives created by mashing the items with blocks via Mesh Modeller are not allowed and unsupported. The shape of their triggers is hardcoded in the game mode, any modifications done towards these items are very likely to break the player detection, resulting in the distorted variations of the items incorrectly detecting players or not detecting them at all.

Support for customized variants of these items is not planned due to unnecessary complications of the trigger shape detection, as well as keeping the consistency between maps by providing easily recognizable landmarks with specific functions.

Would it be allowed if trigger detection was capable of doing that, and the custom things people made are recognizable as what they're function is? and being easy to access
Top

During the past couple of weeks, you probably noticed a few updates popping up for both Pursuit packs. That's right, I've been slowly deploying various changes and additions over that time. Here's an overview of what's been done.

Redesigned map selection screen aims to let players experience a wider variety of maps and focuses on making every vote truly individual. Notable changes: Important: In case of a tie between two or more maps, the first map to receive a vote wins. This also means that if you're the first player to vote for a map, change your mind and choose something else, while your initial pick ties with anything else, that first map you've picked will win.

New map selection algorithm in detail
If you play at least one full round on a map, by the end of the match it will be added at the beginning of the list of your recently played maps. If it already exists there, it will be shifted back to the start. When voting begins, the server obtains a list of 15 maps from all players. Based on the position of a map in each of these lists, a map gets between 1 and 15 points, where a map played more recently will get more points. Afterward, maps are ordered by their points ascending and the first 6 maps with least points will show up as options in the voting.

Redesign of the vehicle selection menu 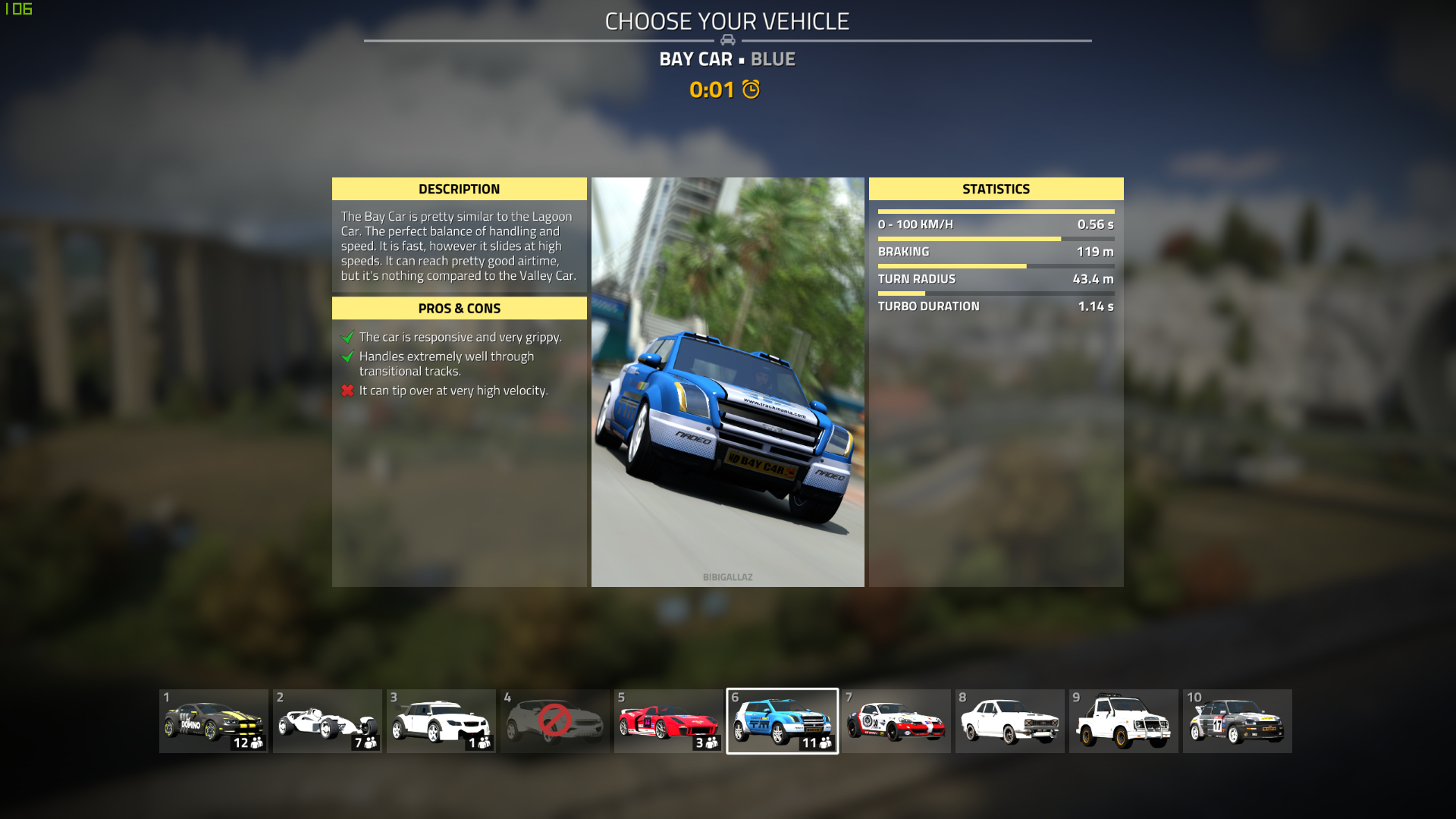 New icons replace the "drowning car" symbol that showed up when an environmental capture was performed. These icons appear in specific situations and reduce the amount of text bloating the screen. Music player received its first playlist, that being a full mix of all 27 tracks that can be heard in Canyon, Stadium, Valley and Lagoon. Only available in the Multienvironment pack. Also, options to shuffle (on by default) and repeat one were added.

Note: Music player will undergo a rewrite, which will let all players on the server listen to the same tracks at the same time, where admins can control the currently played track.

For many years, in case of things going wrong, you had to wait 15 seconds to respawn as a thief. This changed recently, making the time required to respawn progressive. When a round starts, it only takes 5 seconds to retry if you lose control over your car. As the round progresses and more thieves are caught, this time will gradually extend to up to 15 seconds for the last thief remaining. Additionally: Balanced cop points

In the late game, capturing a thief could give you only 1 point, while remaining survivors would receive up to 3. This takes away motivation to capture thieves if you're going purely for points. That's why cop points are now based on thieves points, giving up to 3 for regular capture. In total you can get up to 8 points:

Dommy is on fire So I had this idea in mind for 4 months now and never got encouraged enough to realize it. Anyways, here's a brand new game mode: Pursuit SWAP!

What is Pursuit SWAP?

It's a mutation of regular Survival Pursuit, where half of the players start as cops and the other half are thieves. The goal is simple - catch thieves to score 5 points or survive to gain 1 point. But here's the twist: all players SWAP their roles every 30 seconds - if you're a cop, you'll turn into a thief and vice versa, meaning as much as instead of chasing, you have to run away. These team SWAPs will happen 10 times during the match. The player with the highest score wins.

Pursuit SWAP is a variation played on HuntersArena maps, within the same game mode script as other Pursuit variants.

SWAP will be played on channels for the duration of one week, then its maps will be merged into regular Pursuit playlist.

When the timer hits the limit, but somewhere there is still a thief being chased, the game will continue until they lose their tail or get captured.
Note: Overtime applies only to Survival and Goal Hunt variants. Forgot to mention it in the previous post, but from now on you can use red boosters in Stadium to construct the most extreme maps so far!

The exploit that allowed thieves to switch to spectator mode without any consequences, giving no survival points to remaining survivors has been fixed. Additionally, any policeman who could get an assist on such thief will receive points for capturing them.
Looking at you, Talkie.

This mode looks fun and so crazy. I have just added it more in the Trackmania channels. The question is who won't lose his mind What happened? What's this new title again? Well, after discussing it with my testers months ago, the time finally came to rebrand the Pursuit title to TrackMania² Galaxy!

It doesn't mean the Pursuit mode changes its name, it's just a rename of the title pack. The reason behind this change is my will to continue the legacy of my abandoned ShootMania title of the name name. Galaxy was (or is) my unified collection of about 10 various game modes and the Pursuit title is slowly becoming just that but in TrackMania. While it may still look confusing at first glance, it's really easy to understand if you read the following. I'm aiming to create a unified environment that houses both my TrackMania and ShootMania titles in a single ecosystem with a shared profile, stats, achievements, and unlockables. It's still something to come in the near future, but the preparations are already started. At some point, I plan to revive ShootMania Galaxy, thanks to the new Pursuit codebase, which is compatible with both TM and SM. Right now, we only settled on a name change.

But most importantly for you:
TrackMania² Galaxy is now available for free, no Planets required! 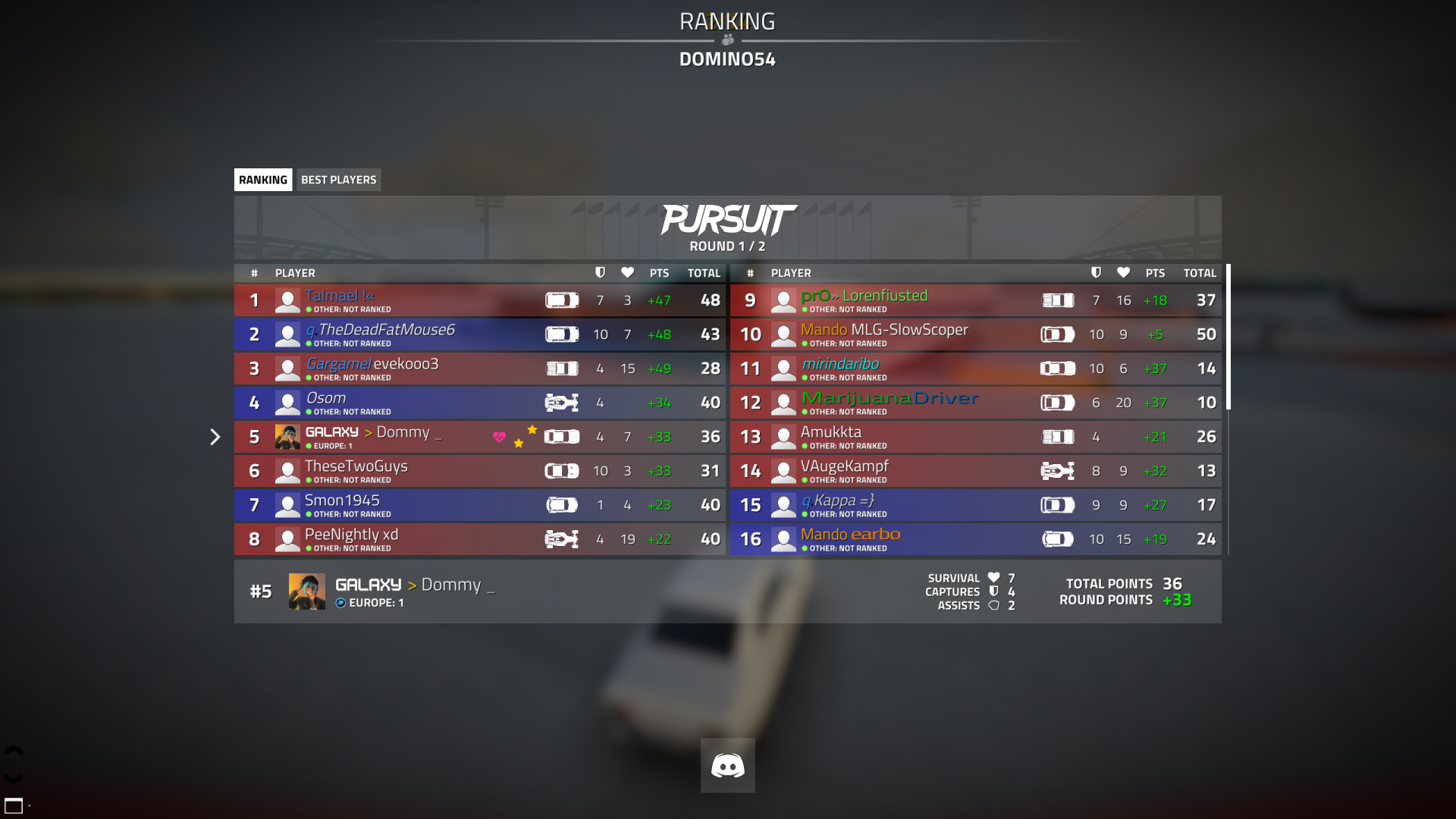 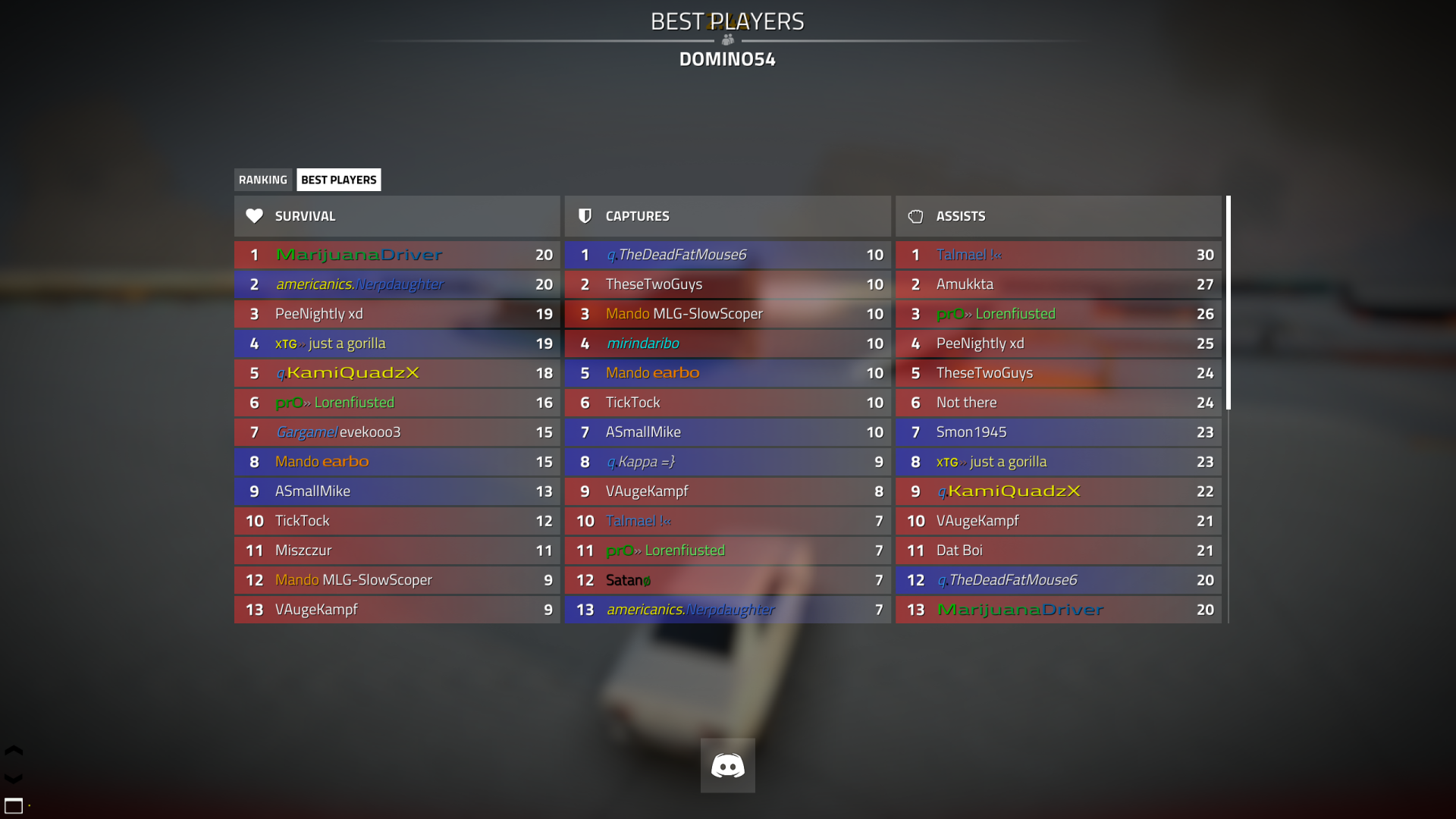 A plain name change is not the only thing I've done for this update, obviously!
(These screenshots show only filler data to give the general look of the new table.)

Take a look at the brand new ranking page, fully written by me and not relying on the outdated ManiaPlanet 3 scripts anymore. This one won't randomly crash upon joining. Besides that, the new scoreboard has numerous improvements to make your life easier.
Exclusive player badges These are prestigious rewards for various players, who are important in the development and upkeeping of the Galaxy packs. They're shown next to the player name in the scoreboard and nametags (more locations supported in the future). These badges cannot be bought, they have to be earned through various means, such as contributing models/translations to the project, being a long-time mapper or winning in official competitions (soon™). Most Nadeo members (who I could find) have their own badge. Some elements of the interface have been tweaked for a bit refreshed look. Some animations have been applied here and there for a more polished feel. It's a new pack, where all the pre-release tests will happen from now on. You don't really need to bother with this pack, it's just for people interested in helping me to test out the new stuff. Best place to get information about this pack is the official Discord server.

You can check out the pack here:
TrackMania² Galaxy Canary

While it may not seem like it, there are more changes in this update, a bit less exposed due to their not so exciting nature. But here they are:

Additions:
+ New, redesigned ranking screen with detailed player info.
+ Some players now have an exclusive badge next to their name, indicating their importance for the Galaxy title.
+ Points are now split into round points and match points. At the end of the round, green PTS are added to the Total, like in ShootMania or Rounds/Cup modes.
+ Added the proximity assists - least priority assists for cops that were within 8 meters distance from the thief (a quarter of a Stadium block).
+ Gamepad can now be used to navigate the vehicle selection screen and the map selection screen.
+ Scoreboard now also counts how many assists a player has scored.
+ Active and Passive thieves system: thieves actively driving around gain more survival points, unlike campers, whose points are capped.
+ Added test mode to the map editor (avoid using for now, impossible to return to the editor).
+ Speedometer now fakes the first 1k RPM to reflect the idle engine sounds of TMU vehicles.
+ Additional cosmetic changes to the speedometer.
+ Added Platform soundtrack.
+ Added an easter egg related to drifting.
+ Added an easter egg played when capturing or being captured by a specific player.
+ TrackMania² Galaxy Canary pack: development branch of the Stadium title for testing.
+ Discord advertisement under the scoreboard.

Changes:
~ Both titles have been officially renamed to TrackMania² Galaxy.
~ Both titles are now free of Planets payment.
~ Hunters mode has been updated and is playable again.
~ The majority of the files have been reorganized, converted to WebP, Json, and OGG respectively.
~ Tweaked the internals behind the UI placement/effects, resulting in fewer frame drops.
~ Optimized assists by checking on them only twice a second and not every frame (100 frames -> 2 frames).
~ Optimized the capture detection by calculating the distance more smartly.
~ Speedometer RPM gauge is now slightly interpolated to reduce jitter effect in TMU cars.
~ More split-screen compatibility.
~ Fixed Thief Zone timer appearing for cops.
~ Fixed on-screen messages having links, which stay once the message disappears.
~ Fixed the faulty detection of random chase assists.
~ Fixed incorrect visibility of player names during the preparation phase, resulting in "random" disappearances of names.

Did you know?
It's over 2 years since the Pursuit titles have premiered!

Join our community to follow the development of TrackMania² Galaxy and be first to know about everything coming next!