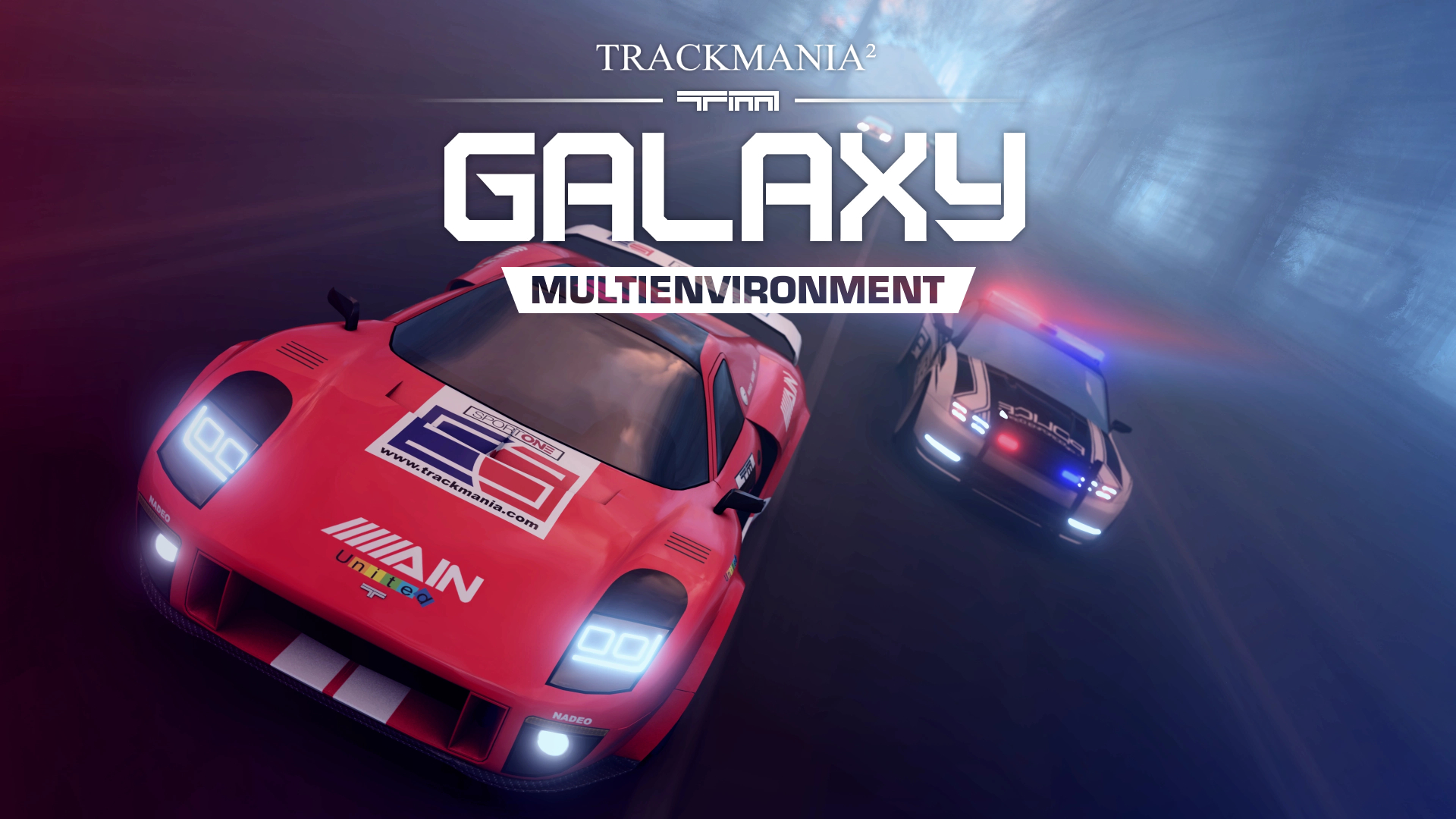 Are you tired of the dull "competitive scene" of TrackMania? Would you like to waste your life by doing something else than hunting your grandma's A08 personal best? Looking for some fresh, entertaining experience? Try out Galaxy!

Galaxy is different than anything else in TrackMania. It's an ever-expanding collection of various game modes introducing new gameplay mechanics and tactics to learn. Run for your freedom as a thief or execute the law as a cop in an intensive Pursuit match. Discover a new way of racing by hunting checkpoints in Goal Hunt. Hunt your opponents and avoid being hunted in Hunters. And yet, there's still much more to come in the future!

After over 2 and a half years since its first appearance, Pursuit made its way into its own 2 titles - Stadium one, dedicated to Pursuit's strong, core community, as well as a multi-environment pack, made for the TrackMania channel. These titles have evolved into TrackMania's counterpart of ShootMania Galaxy - a collection of various modes sharing similar game mechanics. At some point, ShootMania's pack will be revived and both projects will fully merge under a shared foundation.

By now probably the most iconic user-made mode for TrackMania. Run for your freedom as a thief, or execute the law as a police officer.

At the very beginning of round, everyone join Thieves team. After a few seconds, the first officer is selected. From now on, thieves must run away or hide, as the police team will be looking after them. When an officer captures a thief (by driving through them), they join the police forces. Round is over then all thieves are caught or time runs out.

Worth to know while playing Pursuit: Pursuit maps are different than normal races. Here you can build anything you want: a village, maze, city or a complete RPG madness - the choice is yours. However, there are some things you need to know while constructing a Pursuit map.

Goal Hunt may seem like a normal race at first, but the moment you hop in you'll notice a significant difference. In Goal Hunt your task is to reach the highlighted checkpoint first to score the most points. When someone captures a checkpoint, another one is randomly selected. Someone was quicker and captured the checkpoint before you? Don't worry, you can cross the 2 previously highlighted goals to gain some fewer points.

What to know while playing Goal Hunt: Goal Hunt is also a variation of Pursuit - when maps for this mode are played in Pursuit, thieves must hunt their individual checkpoints, rather than getting points for surviving other captures.

If you're interested in building a map for Goal Hunt:

Hunters is a wild Pursuit spin-off. Instead of chasing thieves, everyone is chasing everyone! Once the game starts, you'll receive a target - a player you're supposed to catch in order to score points. The only problem is - someone else is hunting you as well. You don't know who your hunter is. Catch your target to score 1 point. You'll be assigned a new target once you've dealt with the current one (and there are players available). You have to wait 5 seconds to respawn or change your vehicle when someone is hunting you. One map lasts for 5 minutes. The game ends once the time reaches zero or someone reaches the point limit.

I love it, something that looks like also TM/SM combo

. Congratulations for the work man.
Top

Suggestion for a sub-mode:

- Scoring points for thieves based on items collected(stolen?) rather than surviving others' captures.
- Item location is visible only for each thief, it should be random between the preset locations. Items are unique for each thief.
- Next item location is revealed after getting current item.
- Item locations will be preset by map's author. A map like Blockfort can have 30~40 item locations.
- Police gain a % of points of thief captured.
- Thief can reset item location by respawning.
- Offzone and walls around map won't be needed in this mode.
- Logic is that thieves should keep moving while weighing risks(cross through the map or take a longer route to avoid cops?).
My TM2 tracks
My TMNF Tracks
Top

Hello everyone!
I'm glad to announce, that Pursuit title packs have been updated to 1.1 - update, which brings a few important changes to the game mode itself.

Split Screen mode
Pursuit is now playable in Split Screen! Connect up to 4 gamepads to enjoy Pursuit mode with up to 4 players, on single computer. Collisions are on!
Note: Because Nadeo, keyboard is not available as input device, as well as controllers are assigned randomly to the players. 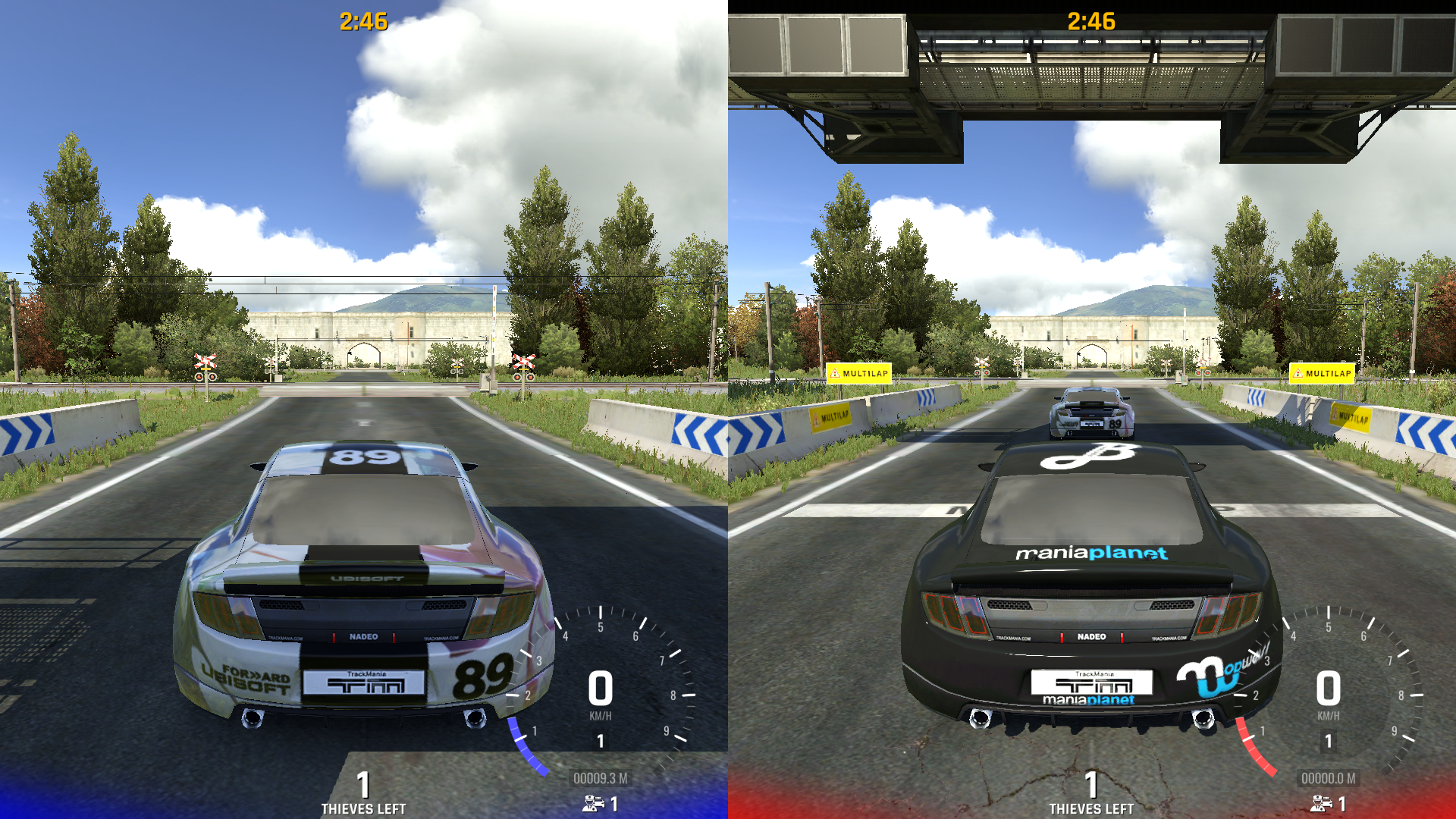 Minimap from ShootMania Galaxy
ShootMania Galaxy's minimap has been rewritten to support TrackMania - which means you can lookup your opponents and teammates on the radar! Players are shown as cars, with icons representing which vehicle are they currently driving. You can tweak minimap apparence and behavior via Pause > Pursuit Settings > Minimap.
Note: Thieves are hidden from minimap, if names are set to be not visible through walls.

Police skin for Canyon Car
If you're driving Canyon Car and you became a policeman, next time you spawn a Police skin will be applied to your car! It should enhance your game experience and allow for a bit easier roleplay during the match. Skins for other cars will come as soon as they're finished. 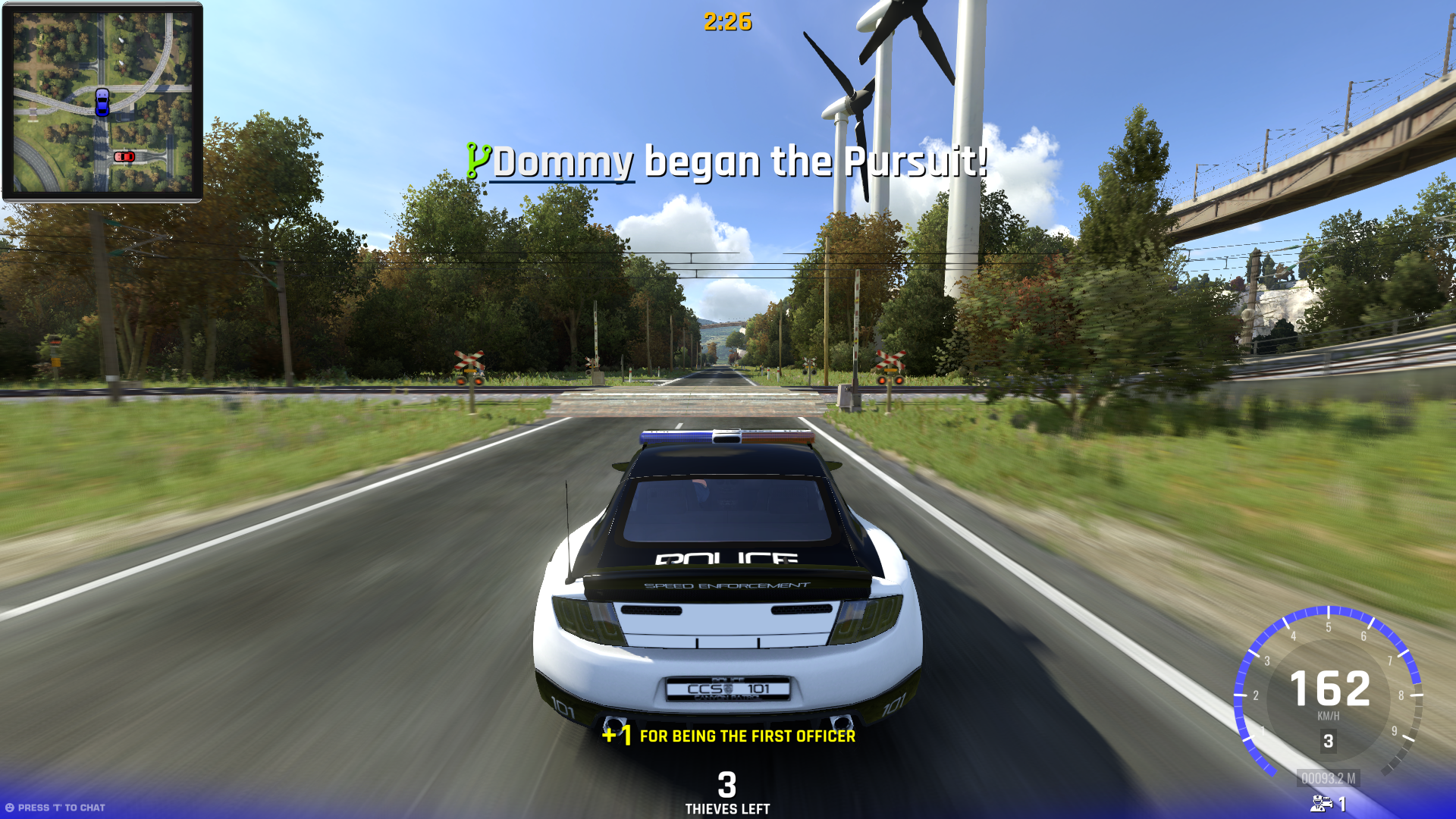 Lagoon Car (to be decided)
Lagoon Car is currently available only during Lagoon maps - it's locked on other environments. Decision to lock it was made after nearly everyone was using it, as it was overpowered. Now, there is a new mechanic implemented in vehicle selection screen, which allows players to gain access to use Lagoon Car on any environment, for 30 minutes, by spending 15 Planets. This option is cuurrently unavailable and yet to be discussed with players.

Other cars available on Stadium
Thanks to Openplanet, you can now unlock and use Canyon Car, Valley Car and Lagoon Car on Stadium environment. Once your game is patched, vehicles are selectable from vehicle selection menu.
Note: Openplanet is not a public tool yet. If you have it, contact me on Galaxy & Pursuit Discord server and I will give you instructions on how to enable other cars. 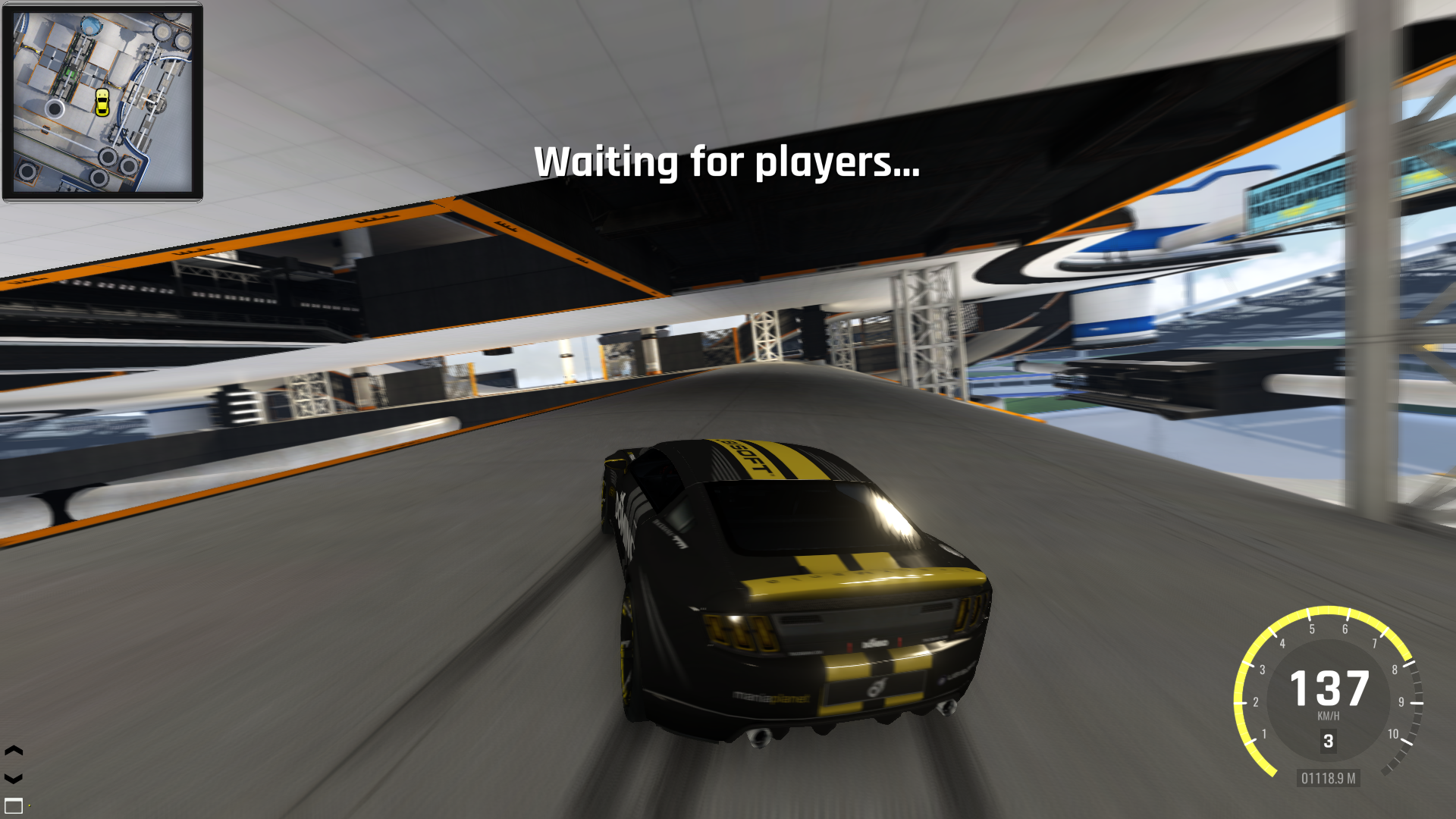 Great idea! I'm gonna be able to play with my brother with the split-screen. It was already great to play it but now with the split screen and the card it's great.

TrackMania² Pursuit - title update 1.2 is out!

Hello again!
Today, I'm sharing relatively good news with you: update 1.2 is out, bringing a few improvements to the core gameplay of Pursuit.

Policemen are finally rewarded
Ever felt your officer skill is underestimated and not rewarding? Not anymore - with recent changes to the points system, officers are now awarded more points for good serving on their duty. With each capture during the round, your streak grows, increasing your points per capture by 1, capped at 5 max. Also, feel the satisfaction of receiving up to 5 points for busting the last thief, depending on the rival officers count. 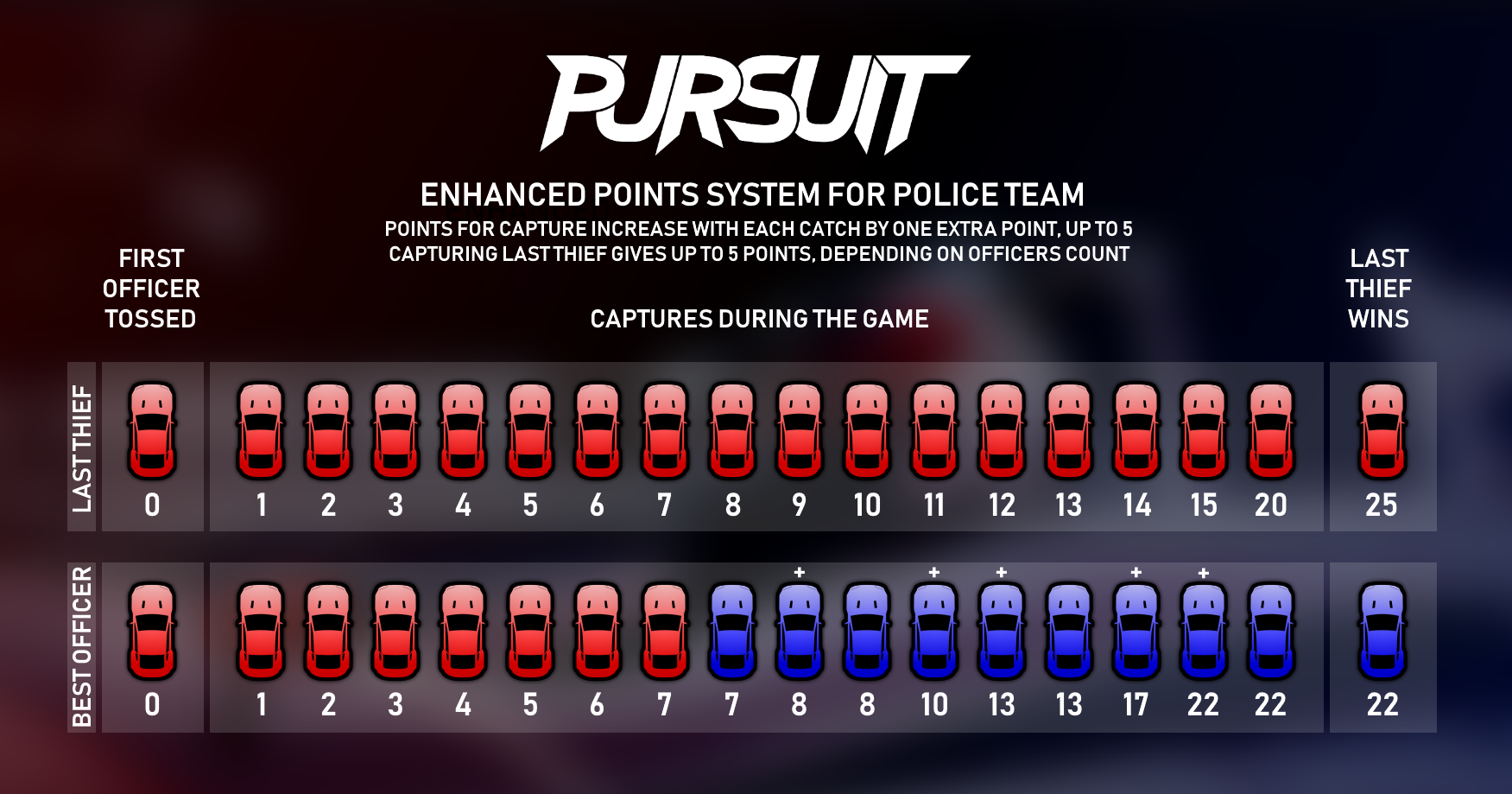 From ShootMania Galaxy: killstreaks and dominations
There's nothing better than seeing the fancy PENTAKILL note, when you end carrer of 5 thieves at the same time. And there's nothing more humiliating than being dominated by other player, who captured you 2 times in a row, not even on the same map, the same hour, the same day...

Adjustable minimap zoom level
Are you playing this map for like 8th time and STILL can't find the way out of the corn field, where your motivation to live has been abducted by an unknown force? Not my problem you lack elementary navigation skills, but there is now an option for noobs like you. Adjust the zoom level of your minimap in Pause > Pursuit Settings > Minimap by picking one of 4 available options: 6x6, 8x8 (default), 10x10, 12x12.

Note: Zoomed out minimap doesn't give any advantage to police team, nor thieves - opponents disappear from the map at the same distance, no matter how much zoomed in/out your map is.

Vehicles shown in the ranking
Finally, more useless information you don't care about has arrived in the scores table. From now on, you can spy on player's vehicle choice through ranking. Perfect for finding l̶o̶s̶e̶r̶s experienced players, who have purchased access to the Lagoon Car on Canyon map.

So how do we play this without being forced to buy canyon?
Top

Option A
Look up the TrackMania channel timetable to see when Pursuit Multienvironment is available for free in channels.

Option B
Download Pursuit Stadium, which is the Stadium-only variant of Pursuit pack and has it's own dedicated server 24/7.