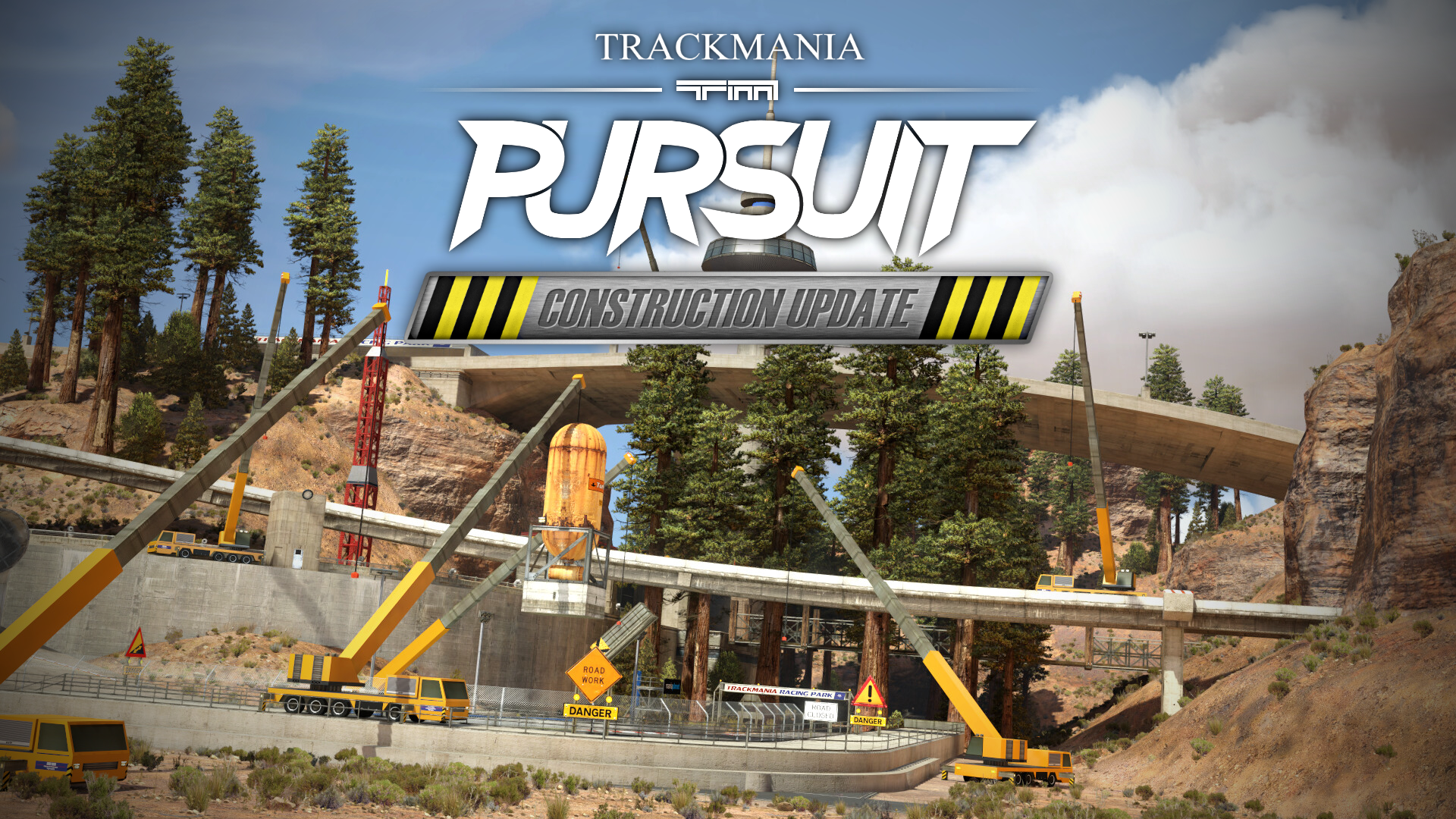 After quite long time, Pursuit is getting some FRESH features! The Construction Update includes a bunch of new tools for the mappers, including gameplay tweaks, vehicles toggle and two new OffZone types.

Vehicle selection screen spiced up
Finally - this page actually shows a picture of the car, brief summary of its pros and cons, as well as properly measured stats!
Note: Stats are shown as percantage score compared to the best car in every category. 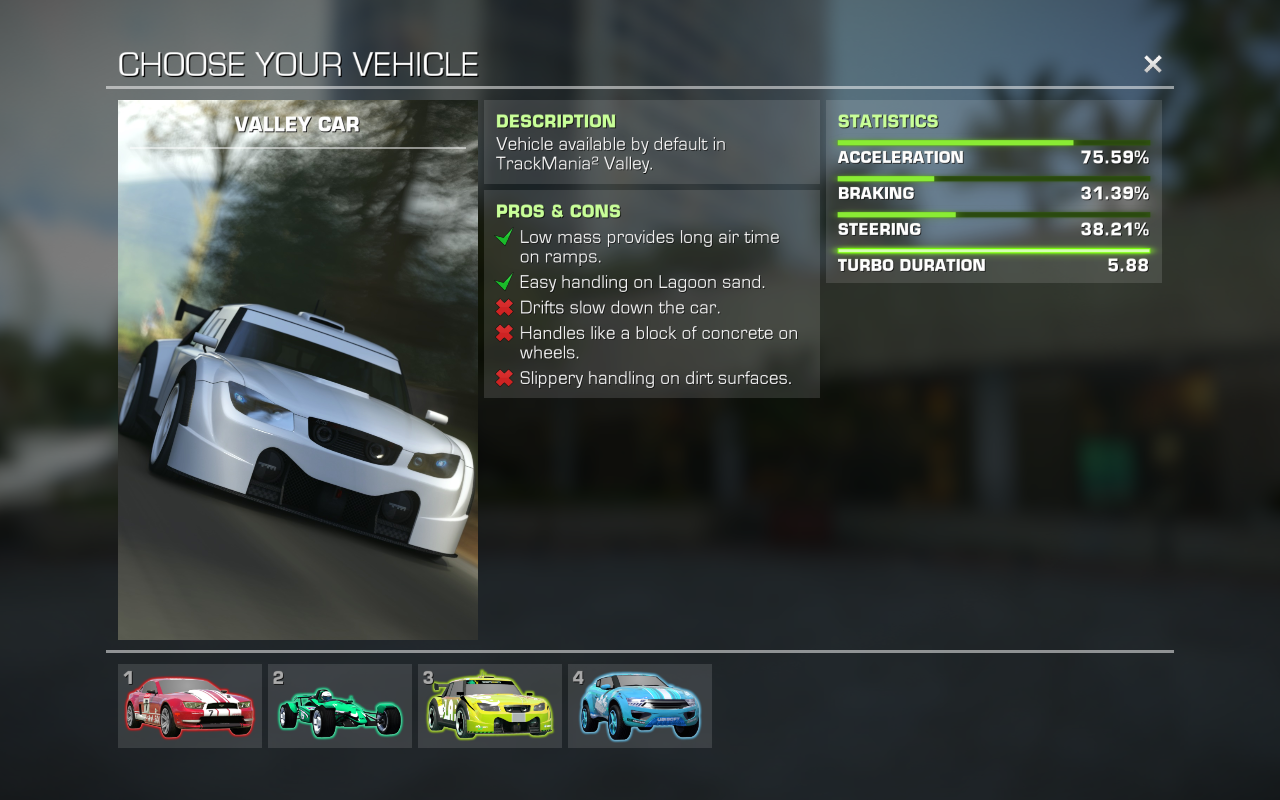 Redefine your maps by tweaking a lot of map-specific gameplay options
Now featuring multiple ways to customize the game experience: 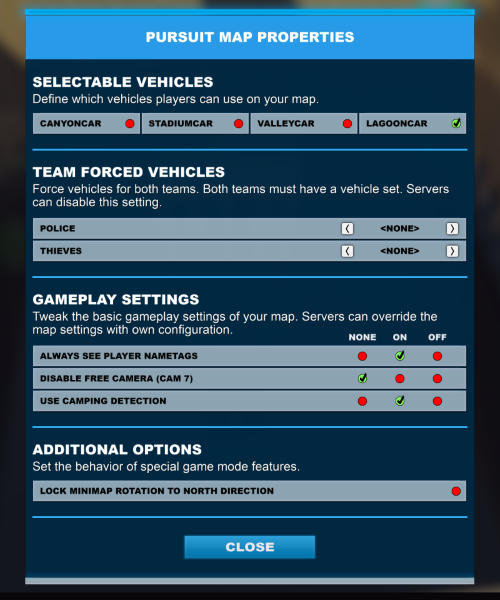 Danger Zone
This new type of the OffZone is less lethal, but still dangerous (haha, get the pun? Yeah, it was horrible). When a player is inside of the Danger Zone, i̶t̶ ̶p̶l̶a̶y̶s̶ ̶t̶h̶e̶ ̶c̶o̶m̶p̶l̶e̶t̶e̶ ̶K̶e̶n̶n̶y̶ ̶L̶o̶g̶g̶i̶n̶s̶ ̶-̶ ̶D̶a̶n̶g̶e̶r̶ ̶Z̶o̶n̶e̶ ̶s̶o̶n̶g they have only 8 seconds to leave it or it treats them just like the normal OffZone would. 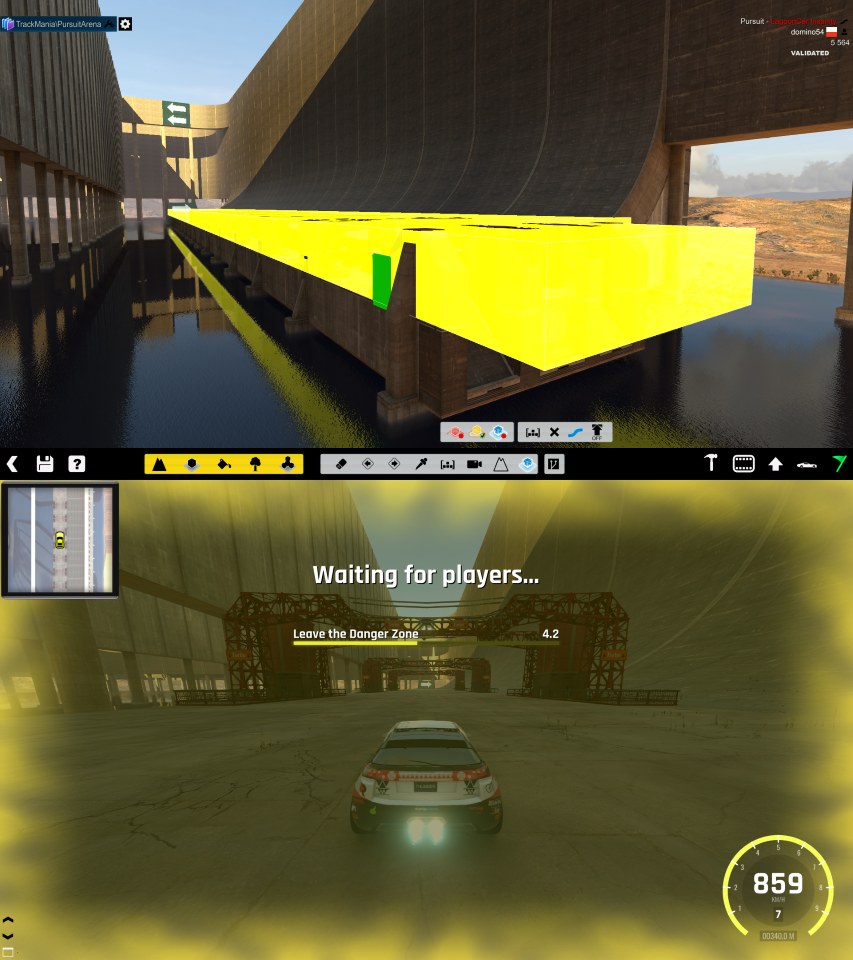 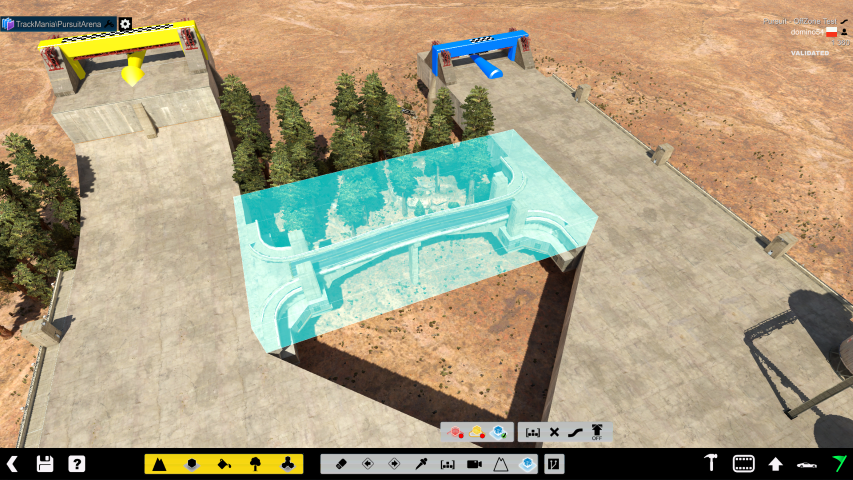 How does that police zone look in-game? Is it indicated at all or is it invisible and do players just have to guess?
1070 GTX, Ryzen 3700X, 16GB RAM, Windows 10
Forum moderator, opinions are my own.

Unfortunately none of all OffZone types are automatically marked with any items whatsoever. While the regular OffZone is mainly used in obvious locations, such as water, pits, gaps and ceilings, the Police Zone remains a mystery until one accidently drives into it. Danger Zone causes less trouble, since one gets some time to escape from it before being affected.

Before we can unleash the full potential of the Police Zone, a drive-through, semi-transparent glowing ornament has to be done by some moderately talented 3D artist outa here. One may put a sign above the restricted area, but it's not as intuitive and seamless as a simple warning stripe. I imagine the indication as something similar to the barrier arrows from NFS, but with police car icons and a wide text saying "Police Zone": 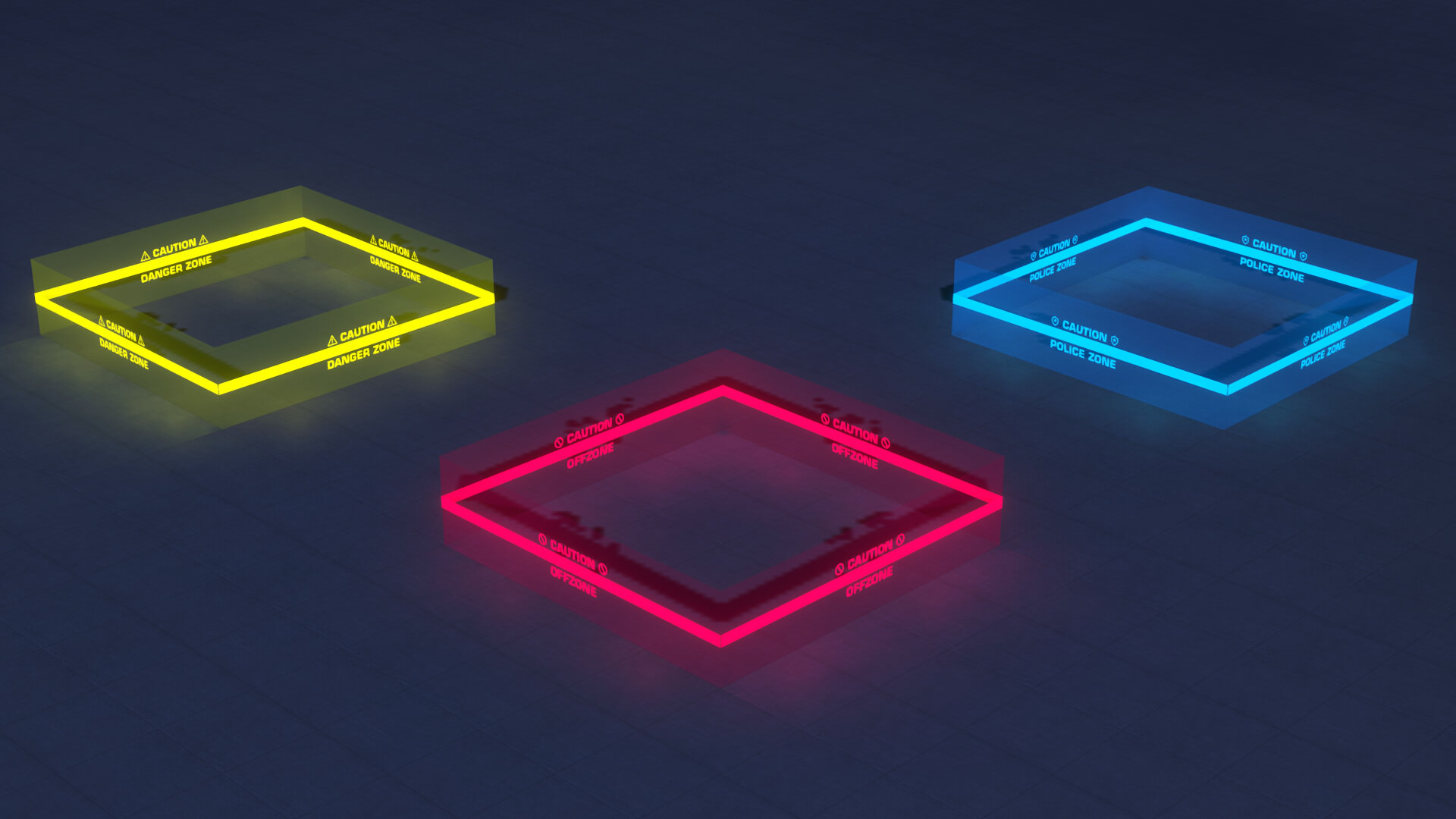 And a small update is here - with a few things, including Zone items by florenzius! These are used as ornaments indicating locations of all three zone types - OffZone, Danger Zone and the Police Zone.

Designed in 2 minutes by me and crafted in 3 hours by florenzius, the Zone items are used to indicate locations of all three zone types - OffZone, Danger Zone and the Police Zone. Important: These items are only decorations - they don't act as zones. You have to place the zone manually using the Pursuit OffZone plugin, then use these decorations for visual feedback.

Placing the items automatically would be possible only under one of these circumstances: Both Danger Zone and Police Zone are relatively new features, only 4 maps are currently taking advantage of them. Mappers will quickly adapt the items to their building rituals, ziyx' recent creation being a perfect example of the proper use of them: 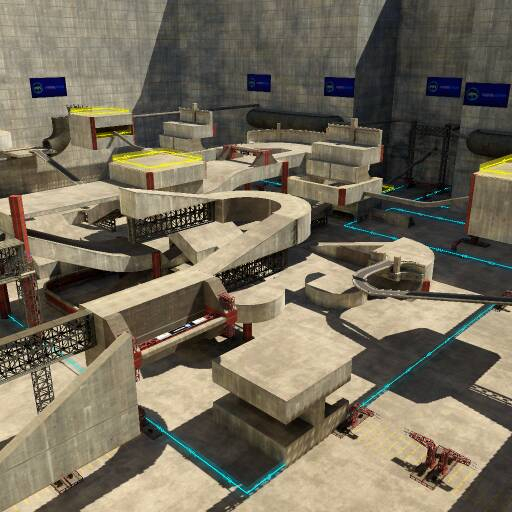 OffZone is a bit different - it's an old mechanic existing in the mode for years. Players familiar with the game mode know where to expect it. Even the new players will quickly find that out. Out of the map? There's OffZone. A deep put leading to nowhere? Yep, there's OffZone too. Water? Guessed right, it's here too. OffZone border item should be used in less obvious scenarios, example being ledge of a floating platform or top of a tall building.

Despite it clearly being a hassle to both mark zoned areas and plcing the items manually, it has an advantage - mapper will mark only the entrance to the zone, while a script would usually put these items inside walls, or overlap with them (and as you may expect, it wouldn't look good).
Ryzen 7 2700X, GTX 1070 Ti, 16 GB RAM, Windows 10 Insider Build
FORUM MODERATOR • CREATOR OF SHOOTMANIA GALAXY & TRACKMANIA² PURSUIT
Contact me via GALAXY & PURSUIT DISCORD
Top

TrackMania² Pursuit - title update 1.4 "4 Years of Pursuing" is out! 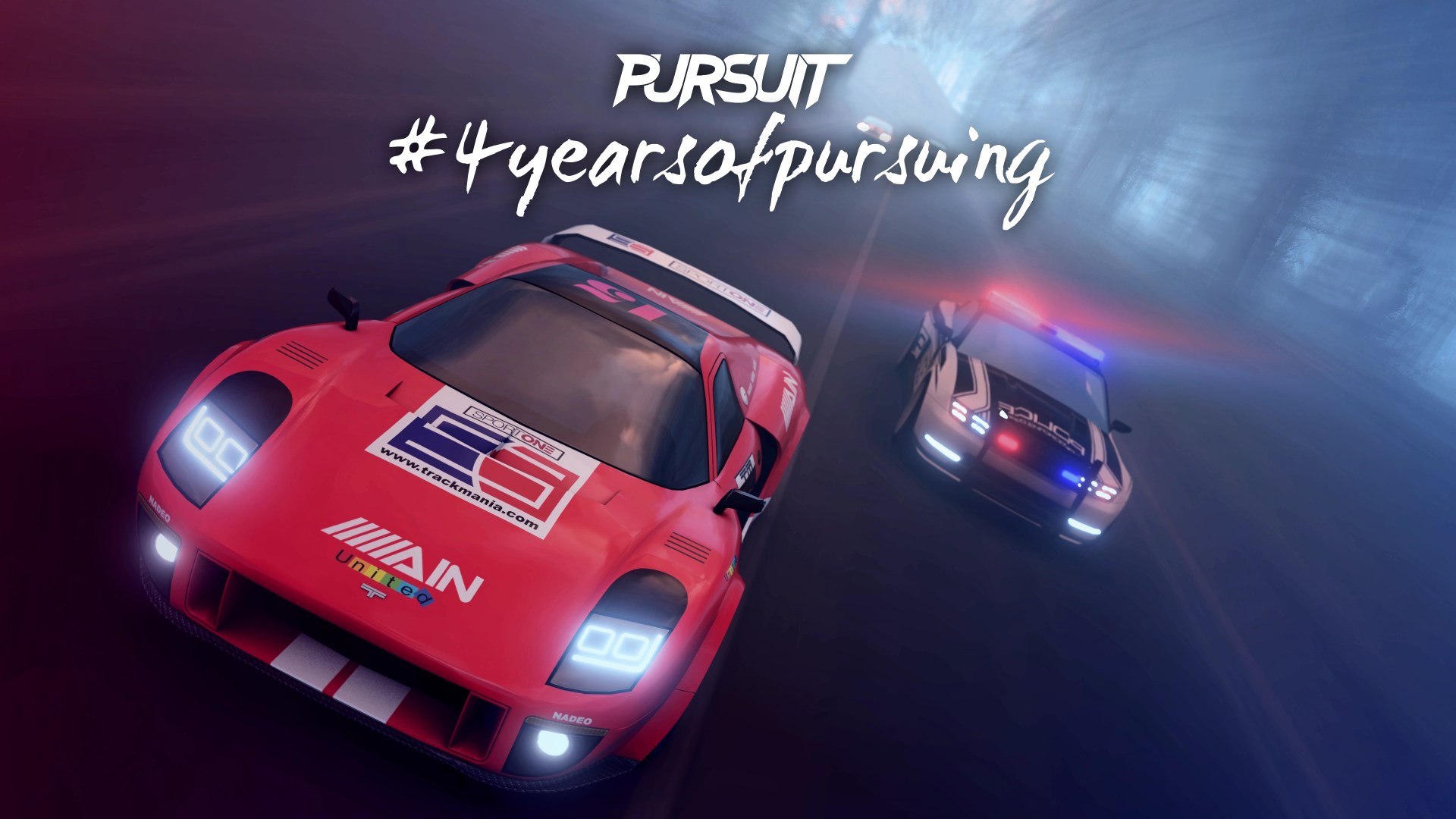 Gotta admit, it's been a ridiculously long time without any updates for the Pursuit pack. But hey, there's no better time for some new content than a 4 years anniversary!

Besides celebrating 4th birthday of my precious IP, with florenzius we're bringing you a whole bunch of new gameplay mechanics and various quality-of-life tweaks.

I don't need to ask you "how many times did you just had them caught?", as the answer is obviously very high. With today's update I'm happy to introduce you to capture assists! It's honestly the most important part of this update, therefore it deserves to be listed first. But how does it work?

In short: game will try to detect who else contributed in catching a thief, besides the person who did it. Whenever you do one of the things listed below, you will be considered as an assistant in the capture, if someone else happens to capture the thief: Assisting in a capture gives you 1 point. But that's not everything yet!
Causing a thief to die through any other means will count as YOUR catch if you're marked for an assistant.
Your assistance status is kept for 15 seconds after performing anything listed above. After that time - no points for you. 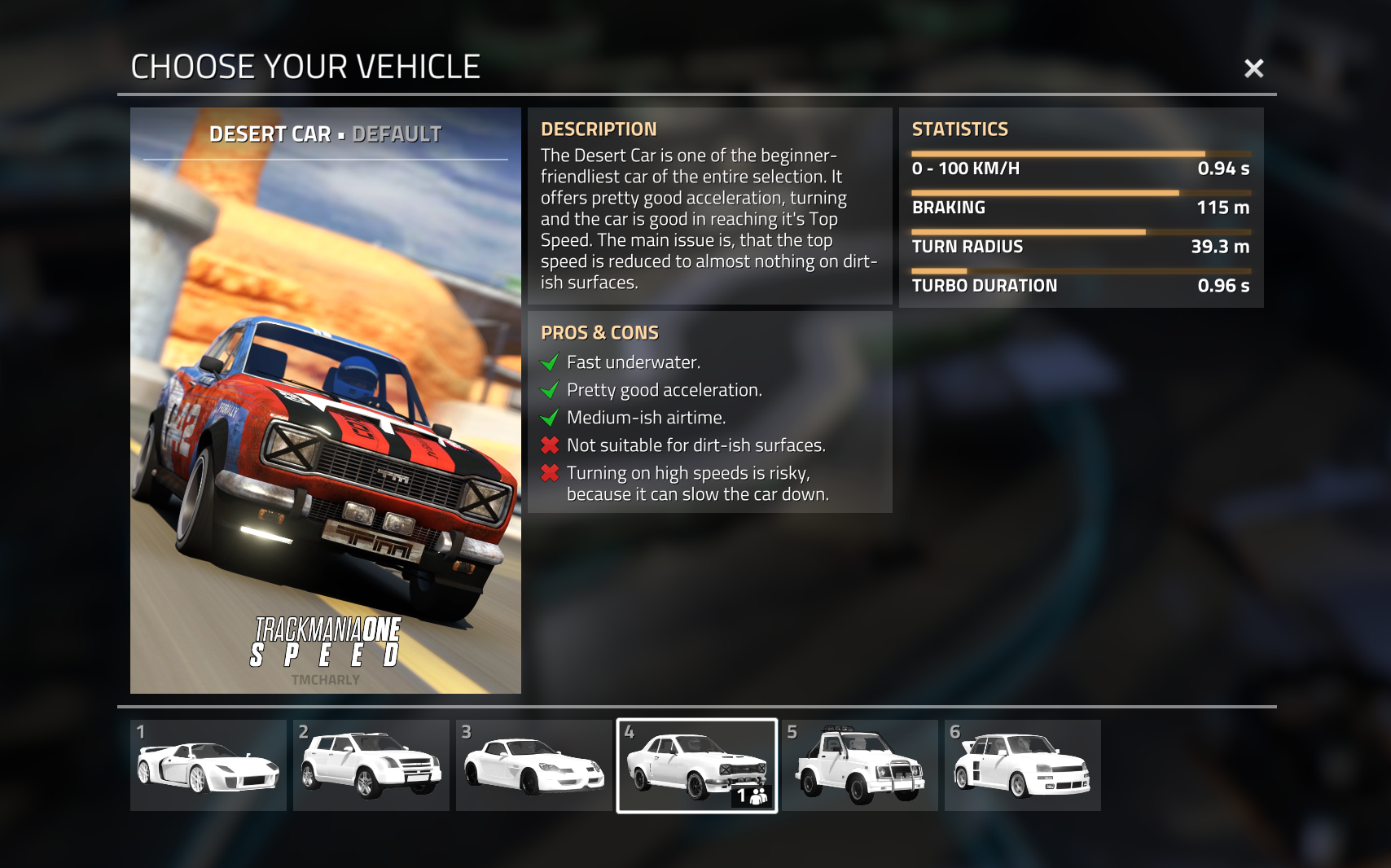 Following the trend of TrackMania Forever cars getting everywhere in ManiaPlanet, thanks to the 4.1 update, Pursuit is now providing you access to all 6 "new" vehicles without any Planet paywalls! (Ridiculous!) With some help from Purification and TM ONE crew, were bringing you upgraded Island Car, Desert Car and Snow Car models as well!

Notice: TrackMania 2 cars are unavailable for the first week, letting players experience them in their full glory. 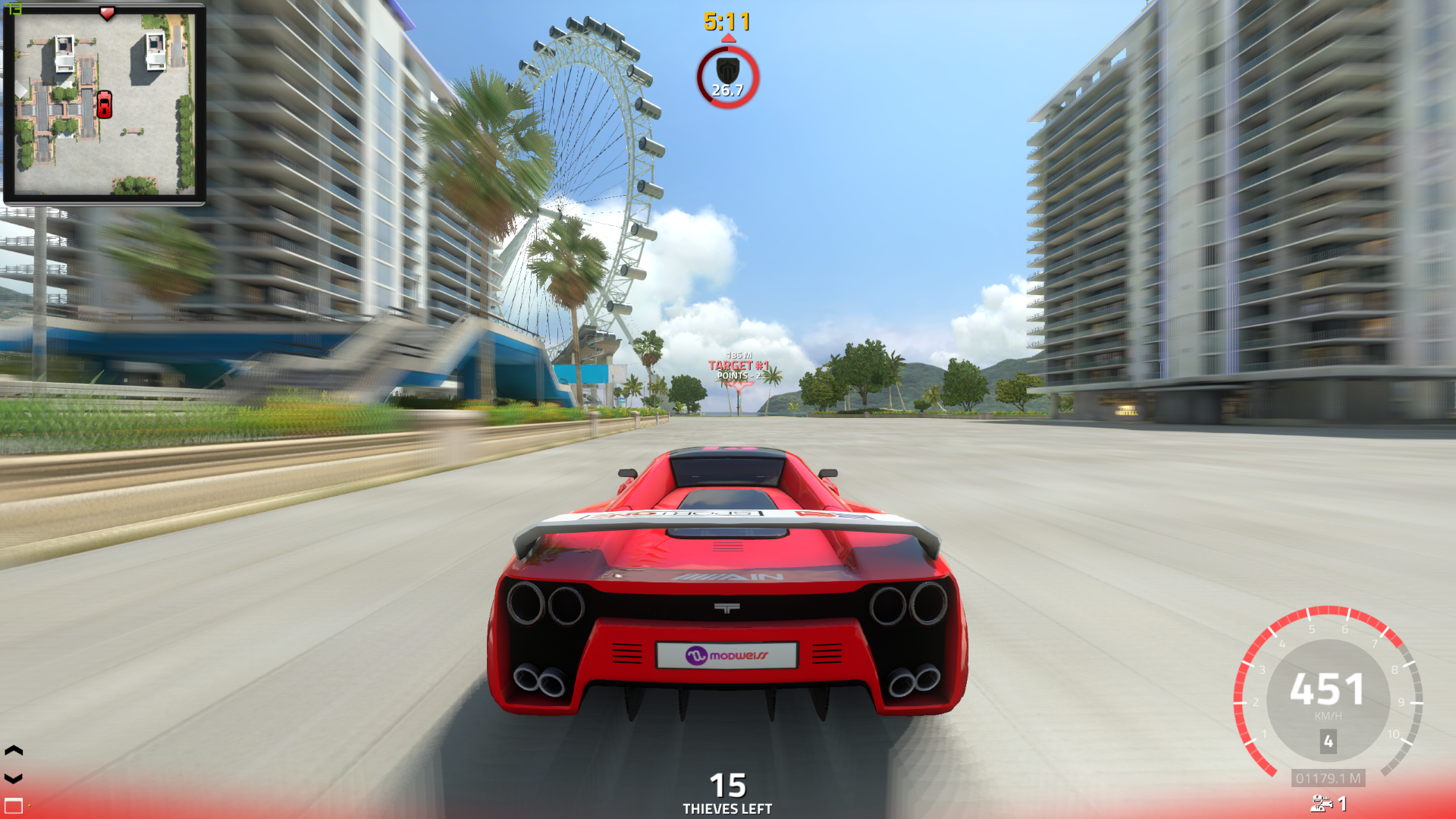 Pursuit and Goal Hunt are joining their forces to bring you a brand new gameplay variant - the Goal Hunt Pursuit. In this variation, thieves don't get any points for survival when someone else is captured. Instead, thieves play Goal Hunt in order to score their points. Every thief has their own individual goal to score 2 points upon reaching. When reached, next one is picked randomly. Once caught, the only way to score points is (classically) to catch thieves as a policeman. 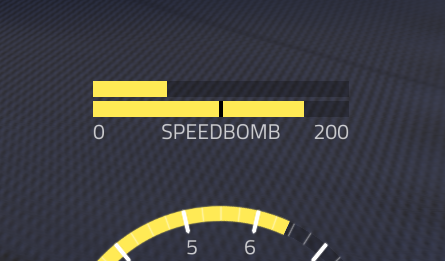 Running away from the law was never so hardcore as with the Speedbomb ticking in your trunk. From now on, maps can enable the Speedbomb - a new mechanic, which "equips" your car with a bomb ignited by driving at slow speed. Forget about camping, this one will make you sure to stay fast, or an explosion triggered after 5 seconds of turtling around will make you lose your precious thief (or policeman!) status in a BANG! 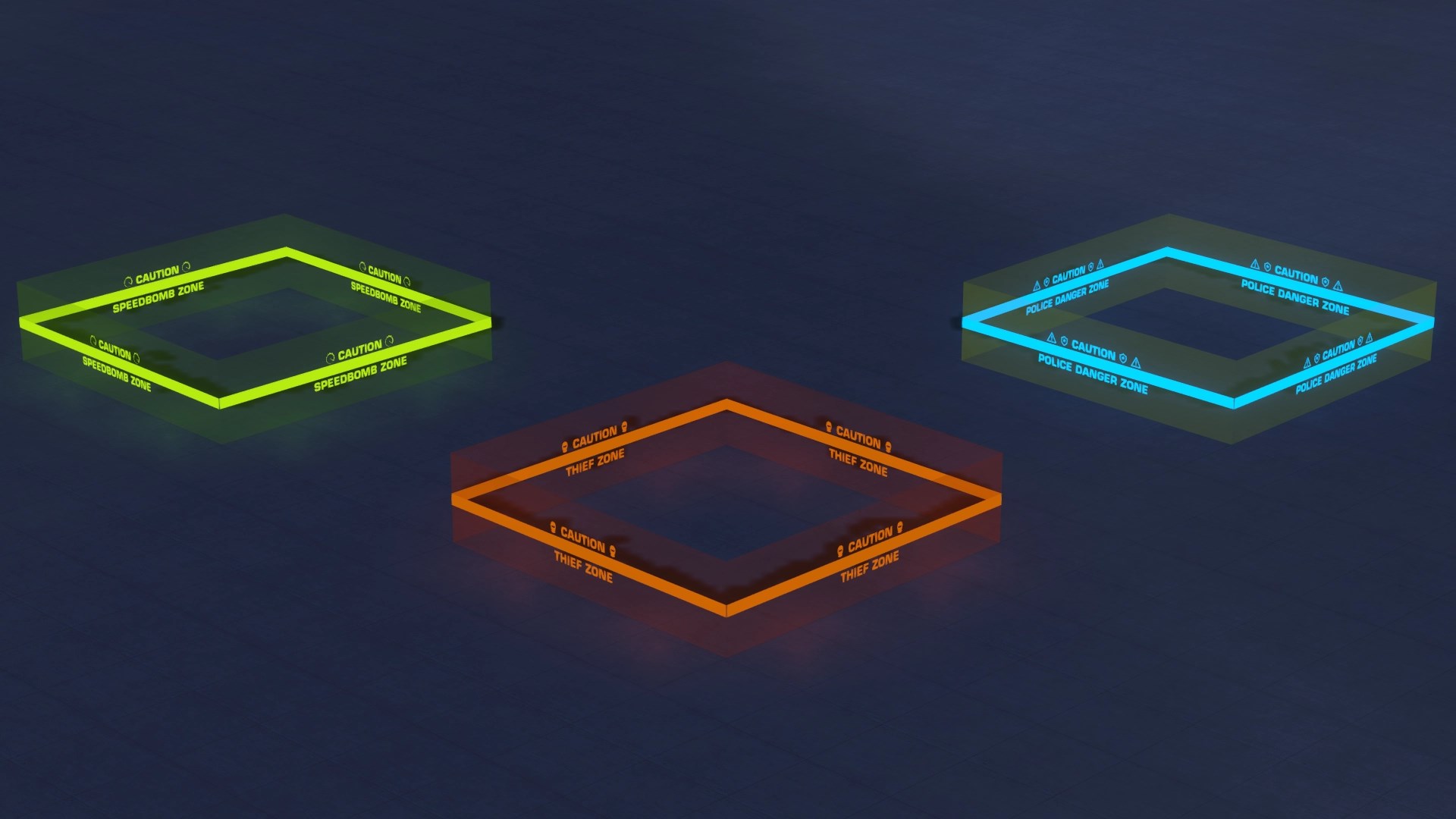 Prepare for a trouble and make it double - with 3 brand new Zones, mappers now get twice as many options they used to have. Every zone serves unique purpose in the arena.

Similarly to the Police Zone, it can be accessed only by the thieves. But wait - if police can't get inside, then doesn't it make it a perfect spot for thieves to remain during the entire game? Well, no. As a policeman you in fact cannot enter this Zone, it will respawn you immediately. However, thieves can stay inside this Zone for 2 seconds only, leaving it as a way to create small shortcuts, which can save some seconds while escaping. Moreover, the time you got remaining in this Zone doesn't reset when you leave - it regenerates at a very slow rate, thus preventing people from camping in here.

Like the name suggests, it enables the speedbomb for any player inside this Zone. Minimal speed requirements are twice as big as with the Speedbomb enabled on the map entirely (200 km/h). Limits can be customized in the map properties.

COMBO! This Zone doesn't physically exist in the editor, however one can make it by placing both the Danger and Police Zone in the same area, resulting in a single Zone, which combines both of the effects. 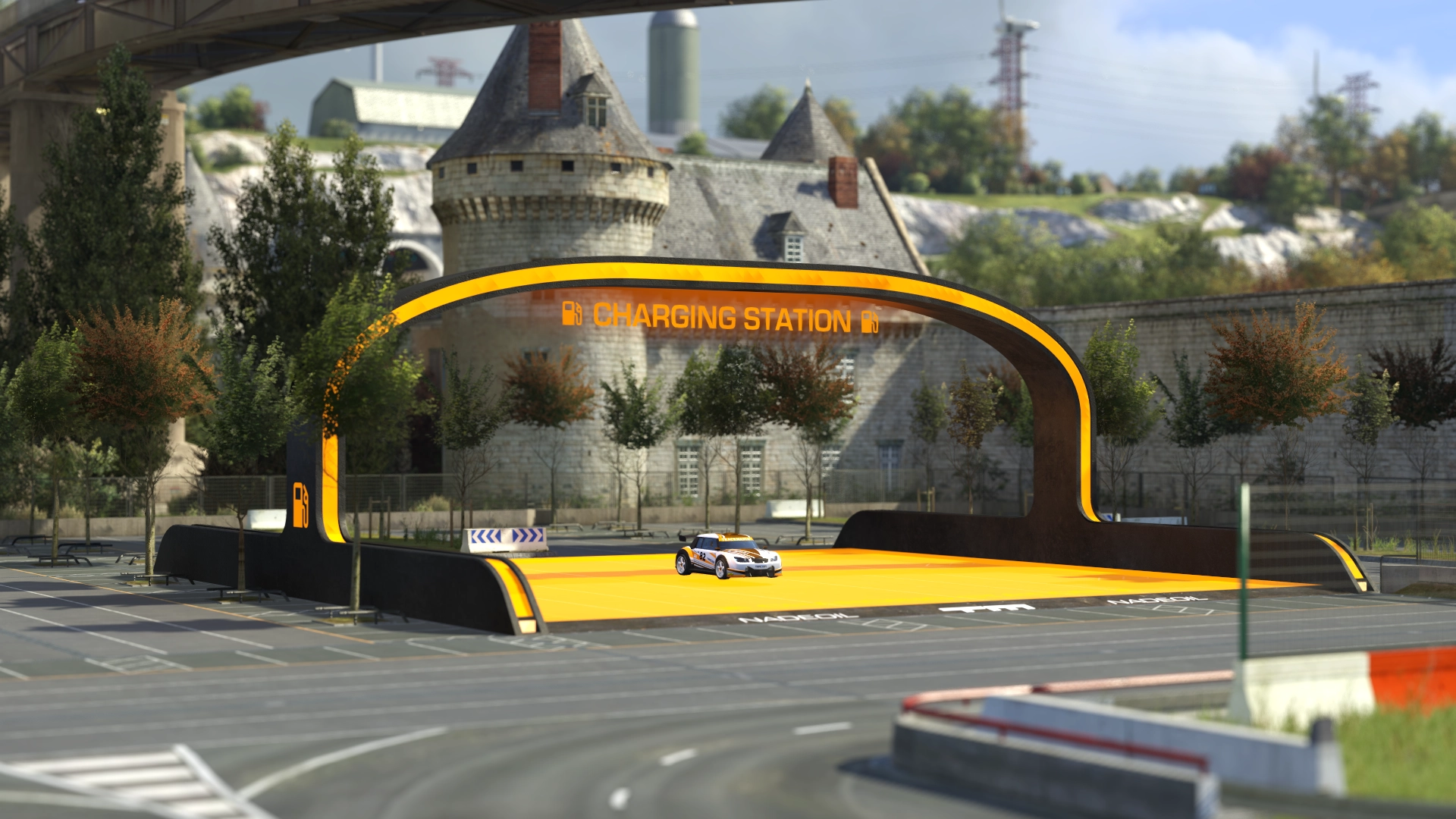 Imagine peacefully driving through the world, while your car suddenly runs out of gas. This may happen in Pursuit now, as maps can feature Charging Stations. With some stations placed, the map will enable Fuel mechanics, which "equip" your car with a gas tank, which slowly dries out as you play. By default, you can drive for 3 minutes or stand still for 12 minutes on one full tank, before your car controls being cut off. Visit Charging Stations spread around the map to refill your tank in order to continue the journey. You don't need to wait for the recharge, it happens almost immediately upon entering a station.

Note: When fuel is enabled, policeman are obligated to wait 15 seconds for respawn, similarly to thieves, to avoid big lack of balance between both teams. 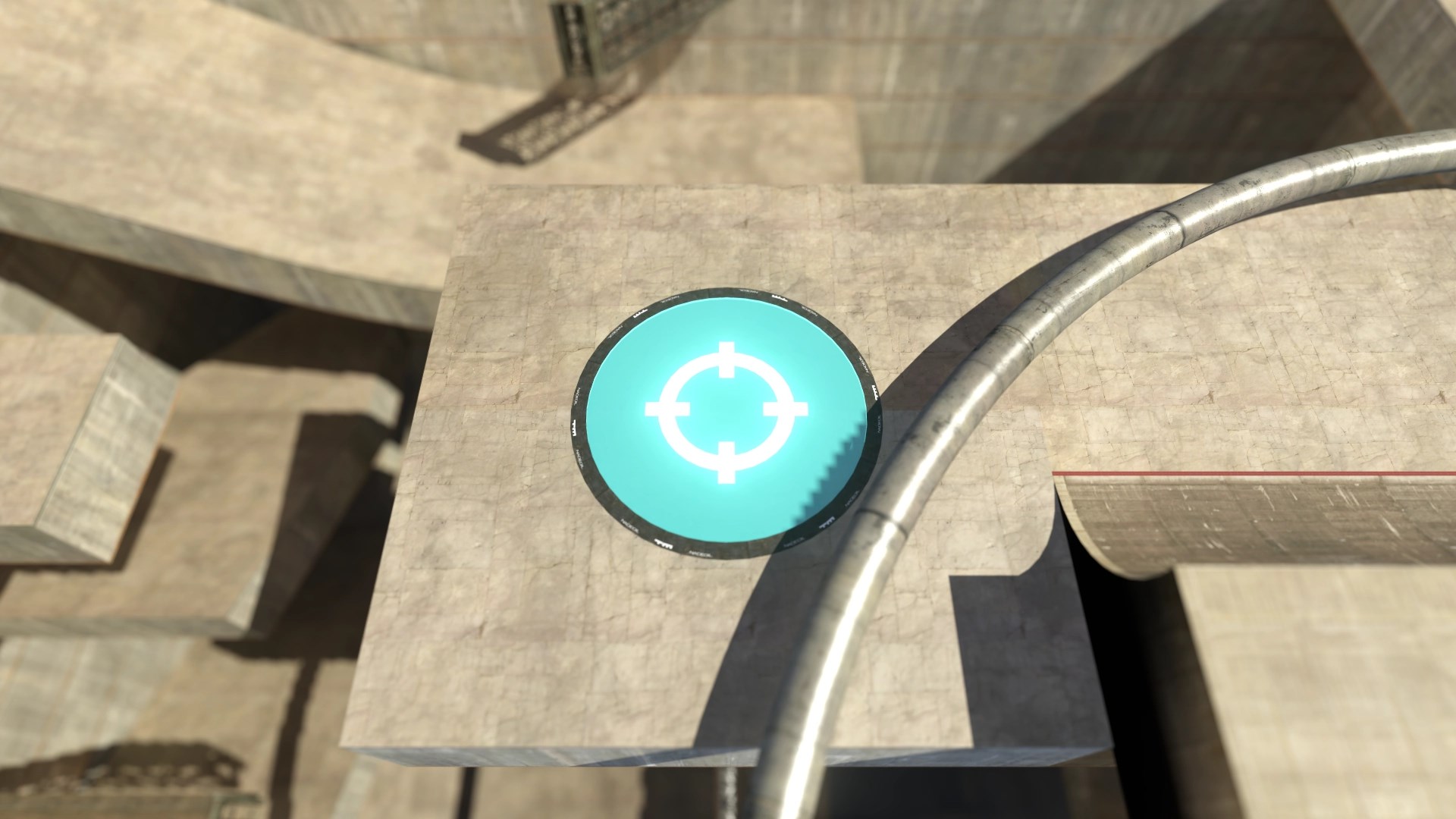 Let's be real - how many times did you play on a ridiculously tall, climbing-based map to only stand here on top, without any reward (except delaying noobish policemen, which can't even reach quarter the distance to you). Race Objectives come here to help you! When a round starts, every Race Objective on a map is loaded with up to 10 (depending on the number of players) points, which just wait for someone to take them. Once reaching these spots, the player is awarded the points, regardless of the team. The next player to reach a Race Objective will receive one point less than the previous one, this repeating until the Objective doesn't award points anymore.

Pursuit is now under ongoing user interface rewrite, which aims to separate client UI updates from the server updates. Whenever there's a bug spotted on the UI, server update will be no longer required, as all the user interfaces are being loaded, composed and handled fully client-side. It also means the translations can be updated as well!

Besides these major additions to the game, 4 Years Anniversary update is also improving your way of playing by many tweaks:

A NOTICE FOR MAPPERS

To get Charging Stations and Race Objectives working on your map, you first need to edit the anchor data od these items. They both are recognized as checkpoints by the game, therefore you have to set their tags to GasStation and RaceObjective accordingly.

ULTRA SUPER IMPORTANT: Both of these items cannot be rotated in any axis, they must be placed level horizontally, aligned to cardinal directions. They can however be placed off-grid at any arbitrary X/Y/Z coordinates. 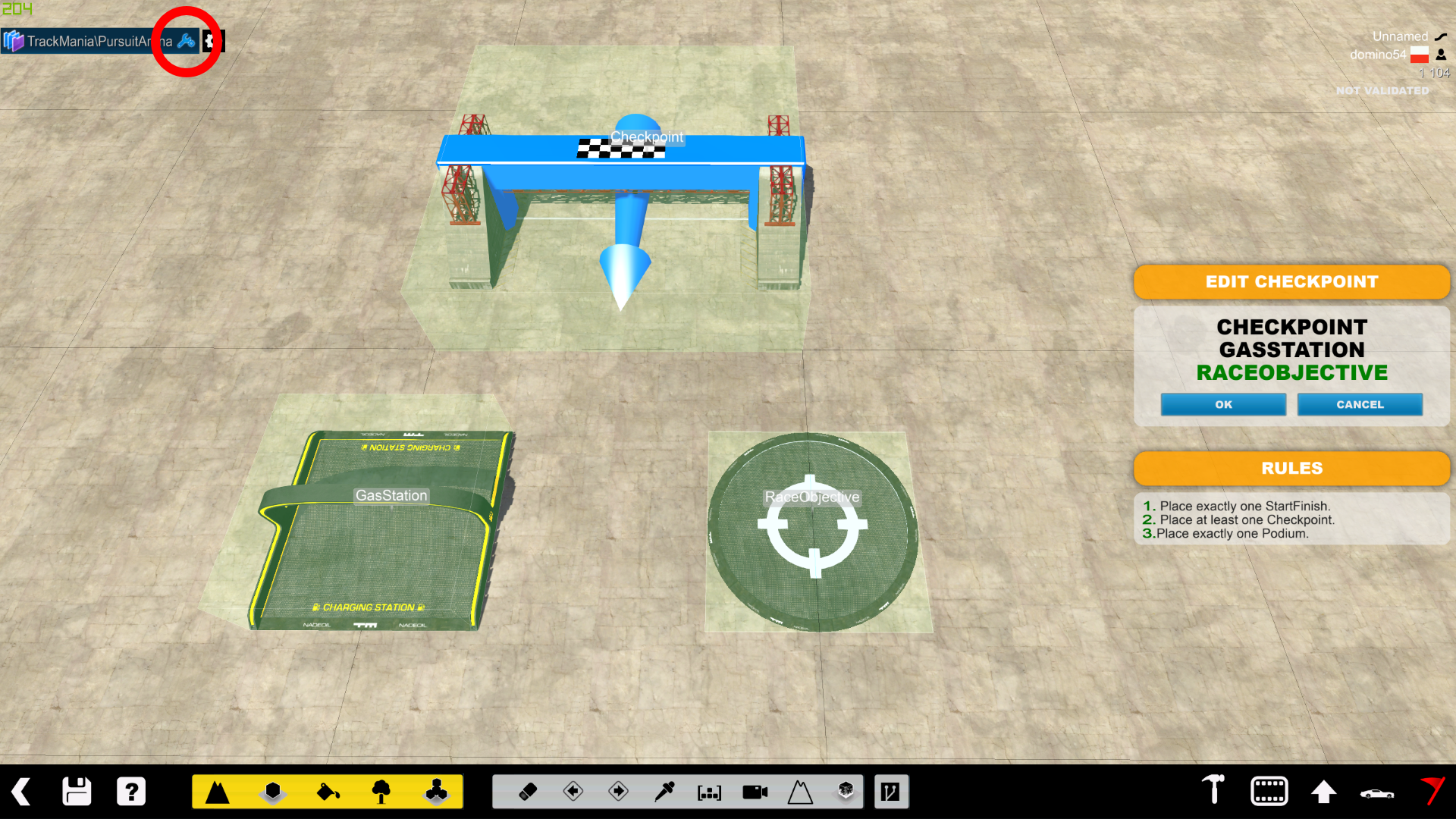 Congratz on the release!

GG to Dommy, Florenzius and all guys having contributed to this great title